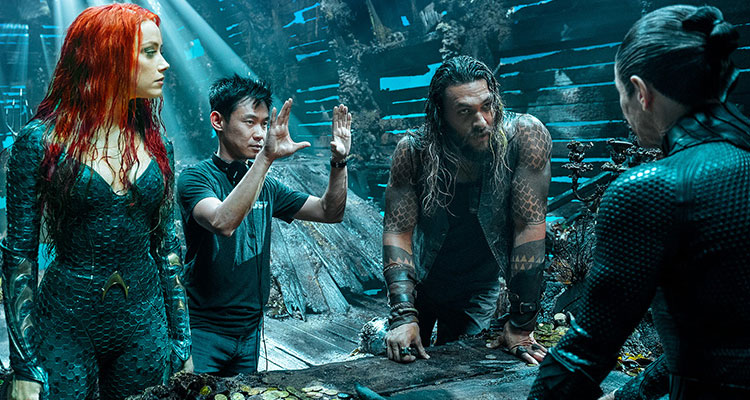 Best known for creating some of the biggest horror franchises of all time including ‘Saw’, ‘Insidious’ and ‘The Conjuring’, this month director James Wan applies his visionary skills to ‘Aquaman’ an action-packed adventure that spans the visually breathtaking underwater world of the seven seas. The film stars Jason Momoa, Amber Heard, Willem Dafoe & Nicole Kidman. AQUAMAN opens in Irish cinemas on Dec 12th

You have come from the dark world of making horror films to this really colourful, and vibrant world of Aquaman. Is that one of the things that attracted you to the film?

When you do the same thing over and over again you want to change things up a bit, and this project allowed me to create a visual I hadn’t had the opportunity to play with before. I got to do a big world creation, and really lean into it, it really let me create and go big with it. It was definitely a big draw.

You have taken influence from the comics. Did you do a lot of research in to the different universes?

I based the movie on the New 52 comics by Geoff Johns, which was basically a comic reboot of the Aquaman story. The movie follows the overall foundation and tone of those comics but I updated the idea, giving it a more modern feel. I made Aquaman a stronger, more powerful character however visually I took inspiration from the Silver Age comics and all of its weird and wonderful characters. The movie is almost a tribute to the old school comic books and their quirky creatures. It was important for me not to be afraid of all the quirky stuff that makes the character so much fun.

Aquaman is perceived as a bit of a joke in the DC world but in this, you have really elevated him. No one is going poke fun at this Aquaman.

I don’t think anyone would dream of laughing at Jason Momoa! People laugh with him, he is a really funny guy, but they definitely won’t laugh at him! But, yes, for the longest time this character has been a bit of joke in the pop culture world. People love to laugh at him for talking to fish and riding seahorses. But really if you think about it, think how powerful you would be if you could command the ocean, and talk to sea life. The ocean is 70% of the planet, I would imagine whoever has that power would be the most powerful person in our world.

You have created such a magical, elaborate world. Did you have a vision of how you wanted it to look right from the start?

I went into this movie with a strong vision of the film. I knew want I wanted the tone to be, how the story arc would plan out, and I had the visual aesthetic planned long before I brought it to the design team. I worked with some amazing people to bring it all to life – from the concept designers to the costume people, and they really spent time on all the detail to craft the aesthetic. It was an army of really talented men and women who brought the vision to life and helped me create this really immersive world that sucks people in. I really want the audience to come on this journey into this big, fantastical world. I want them to have the experience they had entering worlds like in Star Wars, Lord of the Rings, and the Harry Potter films, films where you are so immersed you feel like you belong.

Jason Momoa is a beast of a man, he has massive physical strength. I presume he didn’t have to go to great lengths to be able to portray Aquaman’s strength and skill?

Actually, he had just come off Frontier and he had a different look. He was much bigger than the look that was established in Justice League so he had to lean down and get more cut. All of the actors went to boot camp to get into the right shape. It was hard for Patrick Wilson who plays the villain. He isn’t naturally big so he really had to bulk up so he could hold his own against Jason who is just so big. You don’t want your villain to be too small next to your hero.

Nicole Kidman is such an amazing actor, was she a dream casting for you?

To be able to get Nicole in any movie is great, but to get in this where she is playing the Queen of Atlantis, that is just a dream. She was the first person I thought of when I took the movie on, and luckily, she was willing to come and play with us. The character is so important, and Nicole was able to come in and lay the foundations of the film. The relationships are the beating heart of the film, and her interactions are the emotional backbone of the whole film. I really needed someone who would bring that, and Nicole really did.

Did she embrace the action part of the character?

She really loved it, and she was really excited about her character doing all these really cool moves. She has never done that before, she hasn’t had that chance on other movies. She had some much fun doing it. She is so graceful, she can do the emotional stuff, but she also conveys great physical strength as well.

The film could not be timelier with regards to the environmental story, do you want people to take a message from the film?

I don’t believe you can do an Aquaman story and not talk about the environment. So much of this hero is about the environment. Growing up in Australia we are raised from a young age to really respect the land. We care deeply about nature and the water that surrounds us. It was easy for me to bring that into the film. Patrick Wilson’s character is a villain but his reasoning for what he does comes from a good place. As surface dwellers, we have so little respect for our planet but it’s the only one we have.

Comic book fans are known to be very vocal about their feelings when it comes to film adaptations. Was this something you were worried about?

It was something I was aware of and I wanted to respect it. Comic book fans are really passionate about characters they grew up with and I totally get that. I really wanted to make a comic book movie that was essentially a comic book on the screen. I had to balance that fine line of being respectful to the comic and the fans, but also make a movie and introduce the character and his world to people who aren’t familiar with it. I tried to mimic the comic book splash page when it came to the visuals – so it’s like two pages where it’s just the world and all the visuals within it.

As this is an interview for an Irish outlet, I have to ask a very important question. Jason Momoa is very vocal about his love for Guinness. In the bar scene at the start of the movie, it looks like Arthur and his father are drinking Guinness. Were they?

I have to admit it was the real thing. We had to water it down a little because I didn’t want my actors getting drunk on set but it was definitely the real thing. I’m not like Momoa, I don’t drink it as he does but I do like it.

AQUAMAN is at Irish cinemas from Dec 12th