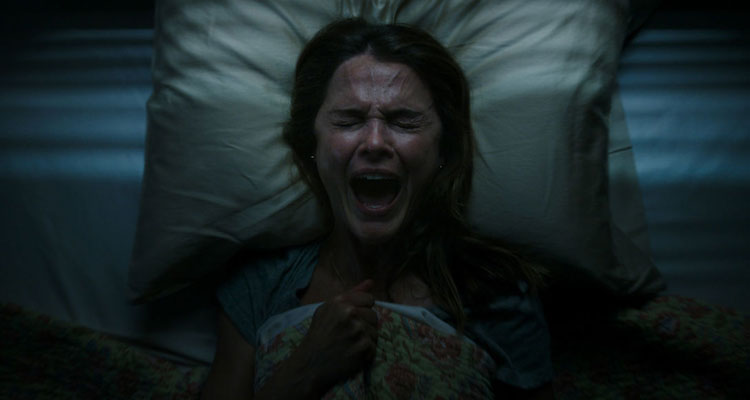 The Plot: In the mist-enshrouded Oregon mountains, a troubled young boy called Lucas (Jeremy T. Thomas) is harbouring a dark secret about his family. His strange behaviour in class and violent drawings of death draw the concerned attention of his teacher Julia (Keri Russell). She asks her police officer brother Paul (Jesse Plemons) to investigate further about Lucas’ family. That’s when mutilated corpses start to appear, the work of a strong man or a wild animal. Or both. Someone or something is angry and has a ravenous taste for human flesh…

The Verdict: Atmospheric creature feature Antlers is another film that seemingly got lost in the pandemic reshuffle. Thankfully it’s finally emerged into the light and onto a cinema screen near you just in time for Hallowe’en. It marks something of a departure for director Scott Cooper, better known for making low-key but impactful films with major talent like Crazy Heart and Hostiles. Cooper is a good fit for this particular film though, as he plays the story straight without the need for comic relief to lighten the sombre mood of an isolated rural town under attack from within. While it’s undoubtedly a creature feature and comes with an appropriate Guillermo del Toro producer credit, it’s also a horror film with a conscience. It has more than just gruesome killings on its mind and taps into Native American mythology about the transformative negative power of greed and weakness. Nature is fighting back.

Cooper’s script with Henry Chaisson and Nick Antosca (from his story The Quiet Boy) grounds the story in a relatable environment: ordinary people dealing with an extraordinary situation that is traumatic for a young boy who cares for his messed-up family. That early groundwork in establishing Lucas’ plight and the resulting adult concern in his home situation raises it above the average horror scenario. This is strengthened by Cooper casting non-horror actors like Keri Russell, Jesse Plemons and Graham Greene as their characters delve deeper into the mythology of the local environment to find an explanation for a spate of gruesome killings. That gives the film the audience credibility it needs to then pursue its more fantastical themes and build towards a convincing showdown. After an admittedly slow burn of dogged investigation, unsettling figures moving in the shadows, creepy staring children and corpses shot in lovingly gory detail, this is where the film really comes into its own.

That final confrontation is worth the price of admission alone, a thrilling display of practical effects work involving a creature that retains some degree of tragic humanity (surely a del Toro influence). It’s a scene that comes across as earned, but with a sobering cyclical message about the creature coming from human interference with the environment. Cooper also neatly sidesteps the expected horror cliches of what this means for the characters, playing it simply as a problem to be solved by people on the ground rather than a doomsday scenario requiring higher intervention. It’s that combination of simplicity and complexity wrapped up together in the involving storyline which generates an effectively moody response. Antlers has some missteps here and there in its pacing and some predictable deaths (turning your back to an open door is never a good idea in a horror film). The overall effect though is a well-made, thoughtful, character-driven film which rams home its point like antlers through the chest. Put that on the poster.

In short: Rams home its point