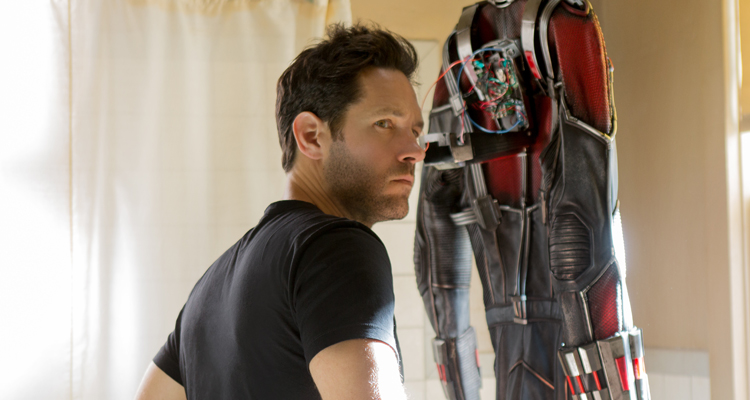 ANT-MAN (USA/12A/117mins)
Directed by Peyton Reed. Starring Paul Rudd, Michael Douglas, Evangeline Lilly, Corey Stoll, Bobby Cannavale, Judy Greer, Abby Ryder Forston, Michael Pena, David Dastmalchian, T.I., Wood Harris, Hayley Atwell, John Slattery.
THE PLOT: Just out after three years in San Quentin, Scott Lang (Rudd) is determined to go straight. Besides, as top-of-the-range cat burglars go, Scott is one of the good guys. An Ocean’s 11 kind of smooth criminal, only in it for the fun, and to help rebuild orphanages. Or, in this case, get access again to his beloved young daughter, Cassie (Fortson) – something the cute little tyke’s mum (Greer) isn’t too crazy about. The fact that mum’s new boyfriend (Cannavale) is a cop doesn’t exactly add to the happy families potential.
Still, going straight proves to be a bust for Scott, as his police record nobbles job after job. And so it is that he decides to do just one more job, on the recommendation of his buddy Luis (Pena), hitting a safe that just happens to belong to DNA wizard Dr. Hank Pym (Douglas). Pym has got troubles of his own, having recognised years ago that his breakthrough in shrinking live subjects to the size of an ant might actually be dangerous in the wrong hands. And so the good doctor retired, feigning failure, only to discover that his protege Darren Cross (Stoll) saw lots and lots of dollar signs in those wrong hands.
With Pym’s daughter, Hope (Lilly), going undercover as the increasingly unstable Cross’ righthand babe, the doc has set out to find just the right kind of burglar to steal the data of mass destruction and, hey, help stop the madness. Which is why he made it so easy for Scott to break into his safe. The sly dog.
THE VERDICT: The influence of ousted director Edgar Wright is all over ANT-MAN, the latest in the Marvel monster blockbuster rally to come crashing through our screens. It’s there, naturally enough, in the original screenplay Wright co-wrote with fellow English fanboy Joe Cornish, but, more significantly, it’s there in the inspired comic tone throughout this surprisingly rib-tickling movie.
It’s there when Ant-Man is battling a fellow miniscule superhero inside a plummeting, carouselling briefcase, the inclusion of the world ‘disintegrate’ in their impassioned dialogue triggering a phone’s voice command to reply, ‘Playing The Cure: Disintegration’, with Robert Smith and co. suddenly joining in on the action.
Ant-Man is full of those Royale-with-cheese moments, winks to the camera that lift the curtain slightly for the audience, and lets them see behind the machinations and thus, feel in on the joke. That replacement director Peyton Reed is known largely for comedy – THE BREAK-UP (2006), YES MAN (2008), eh, DOWN WITH LOVE (2003) – is significant. This ain’t no Michael Bay chest-thumper; ‘Honey, I Shrunk The Superhero’ sets out to mix the iconic with the ironic from the very start.
And having the huggable Paul Rudd as Spider-Man’s really little brother helps get that balance just right. I’ve said it before, but, is there anyone in the world who doesn’t like Paul Rudd? Michael Douglas brings his cocked-eyebrow A-game to the table too, whilst standard-issue intellectual hottie Evangeline Lilly is no doubt chuffed to be in a real blockbuster sci-fi contender after 2011’s rusty REAL STEEL.
Whatever about the ugly scenes that may or may not have occurred behind closed doors here – as Wright was told by Marvel that he wasn’t the right stuff after all – the end result is pretty darn wonderful. Which is some achievement when you consider the fact that you’re dealing with a superhero who could be killed with a rolled-up newspaper.
RATING: 4/5
Review by Paul Byrne