The haunting coming of age Irish film ‘The Winter Lake’, directed by first time feature director Phil Sheerin will be available on digital download from 15th March 2021 across various platforms in Ireland including iTunes, Sky Store, Virgin, Google Play, Rakuten, Chili and IFI@Home and is currently available for pre-order on iTunes: The Winter Lake.

Filmed in Sligo last year, the film starring Emma Mackey, Anson Boon & Charlie Murphy is a gothic coming of age tale about a young boy who uncovers a dark secret in a turlough which sets in motion a series of unsettling events involving his mysterious neighbours.

The film centres on alienated teenager Tom, and his troubled mother Elaine, who relocate to a run-down inherited farm in rural Ireland. There, Tom makes a frightening discovery in a nearby seasonal lake. The consequences of this discovery draw the uneasy duo into contact with their neighbour Ward, and with his charismatic but secretive daughter Holly. As Elaine makes tentative steps toward forming a relationship with Ward, Holly draws Tom into a dangerous plan. The four characters’ conflicting fears, desires, wills and weaknesses become entwined and build to a violent climax, as a dark story of family, secrecy and sexuality is played out against the bleakly beautiful countryside.

The Winter Lake is an official Irish / Canadian co-production between Tailored Films and EMA Films and will have a cinema release in late 2020. 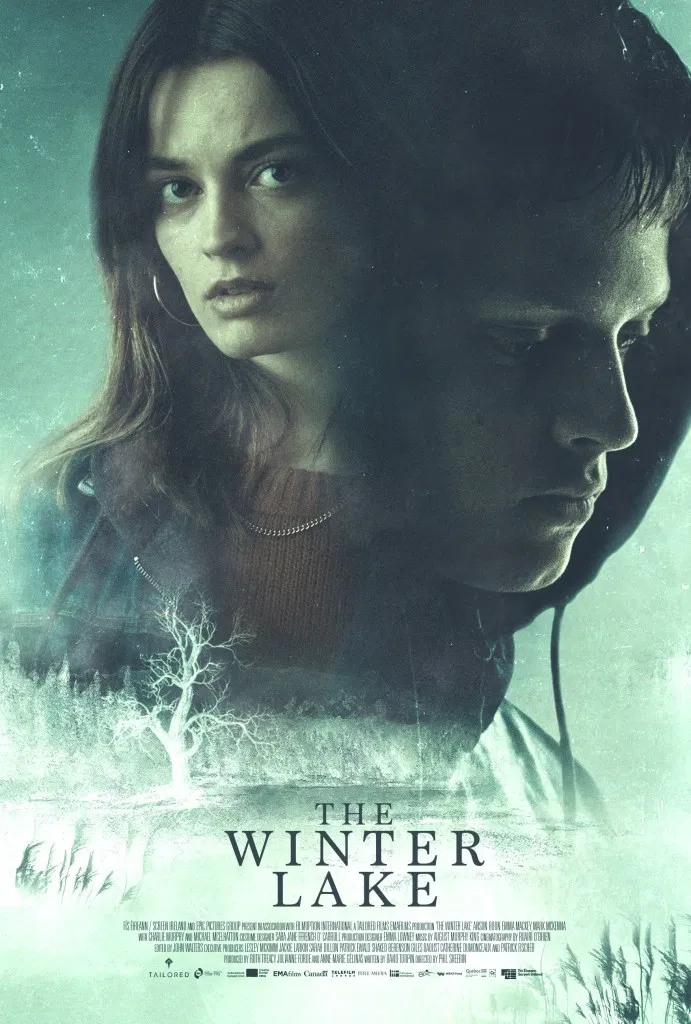 So, Anson what was it like working with first time director Phil Sheerin?
It was amazing. I don’t know too much about the fact that it’s his first time, but his level of creative collaboration is just amazing. We sat down together for so long discussing ideas we had for the character and it was one of the reasons I wanted to work with him. This was because as soon as I met Phil, I could see how enthusiastic he was about this character and I was so humbled that he wanted me to be his Tom. He kept accidentally calling me Tom. I love building characters so to have that experience with someone who is as zealous about it as myself was good.

You spoke on it being a collaboration to build Tom. What went into building the character of Tom? He’s quite a unique individual, quite alien from everyone else.
It’s interesting you should say that because when I first got the email about The Winter Lake, I remember the words used to describe Tom in the casting brief included alienated and wistful. I remember that sticking with me because I had never heard a character described as that before. I’m glad you picked up on that.

As you said he’s unique and he’s completely in his own head and so it was really important for myself and Phil that we created a series of memories for Tom that delved into Tom’s childhood and his unique and specific upbringing to help work out what lead to him becoming the person that you see in the film. So, we picked apart the previous experiences that shaped him into the person he became. This ultimately really helped as part of my process was to not think about the scene but to think about how Tom would react to any given situation and then just do the scene the first time without rehearsing it before and just seeing what happens in a natural way because at the of the day Tom hasn’t had many impressions made on him. He never had much time in school, doesn’t have a relationship with his parent so he more relies on his instincts.

You’ve spoken on previous interviews about the importance of your family in your life, particularly with your previous film Blackbird. Did you bring that in as an inspiration for building your relationship with your onscreen mother Elaine played by Charlie Murphy?
It’s different obviously because when you watch the film there is a real relationship barrier between Tom and Elaine. So, it was important for Charlie and me during the rehearsal process and in-between shooting to not allow our characters to mix offscreen. We wanted the audience to feel the tension, the awkwardness and the lack of familiarity between these two characters which is so rare between a mother and son, that was important to us. So, although Charlie and I became great friends offscreen we had to make sure that didn’t translate onto the screen. I think that really helped and I hope it’s tangible for audiences this barrier between them.

The Winter Lake is such an intimate film. There are only four characters. It could almost be a play. What was it like working in such close quarters with Emma (Mackey) and Michael (McElhatton) as well?
It’s funny because the relationship we all had offscreen was so different from the one our characters have onscreen because like I said there is such an awkwardness between all the characters. They’re all unique and all in their own way damaged who find themselves in this wild rural town in the west of Ireland. They’re all plunged into this dark and sinister situation but obviously offscreen we had an amazing time working together. Charlie and Michael definitely brought the craic and we all spent a lot of time going down the local pubs together and Emma was just so committed to the role and it’s such a hard role that she plays and I think she was impeccable.

So, what was your experience in Sligo where most of the film was shot?
I enjoyed it and the landscape to me was important because it was like a metaphor for Tom. It’s wild and feral and primal and at times dangerous and it was really important for me that I embrace that and explored it like Tom does. Right before the filming took place I was living there and I went out for a few excursions and took public buses around all the towns in the area and walked through the communities just to explore the feeling of being in such a unique landscape for the first time and how that might be for Tom. It was important because I think the landscape really adds to the mood and the setting and the feeling and all the harsher when you such a wild landscape.

So, is it right to say this was your first time in Ireland?
Yeah it was my first in Ireland full stop. I landed in Knock Airport, we were staying in Manorhamilton and it was great I absolutely loved it. The community was so welcoming and then when we did some underwater elements in the film we shot in Dublin. So, I got to experience two separate parts of Ireland, but I loved both.

The Winter Lake is a kind of coming of age story but with a grim edge. How did you feel about those darker edges in the characters and in the story?
They were what attracted me to the film because I remember when I first read the script I was on a plane going abroad to shoot something and I received the email and I read it and you know that feeling when you’re immediately gripped by a story? That was this film, it was so dark, so tragic and there is some real horror in it and it just fascinated me.

There is one scene in the film where Tom makes a grim discovery. Can you speak on how you felt during that scene and what Phil wanted out of that scene?
It was very intense and emotional as you can imagine. Phil was always quite consistent in how he filmed his scenes and that is he knew where he wanted to end up at the end of the scene but he didn’t know how we were going to get there and that was very much what he wanted, a natural in the moment experience. So, I approached this scene knowing who Tom was but not knowing what was there. I stayed away from the props, I just prepared, and I arrived on the day and I opened my eyes as Tom in the moment.

So, to you Anson who is Tom, is he sinister, is he hurt, is there a sensitivity to him no one understands?
Tom is a very lonely person. Tom hasn’t had a normal upbringing. He doesn’t have those relationships we would have. He moved around a lot as a child so he could never form bonds. When we meet him at the start of the film, he is washed up on this farmhouse with his mom Elaine who has inherited this house from a forgotten relative. Because of all this and where Tom is at the start of the film, he’s a blank canvas. He’s never had a teacher to build him up, he doesn’t have a parent to teach him morals and I like to think of him like a wild animal, and as I said he relies on his natural instincts.

You know I did a film called Blackbird about supposedly a perfect family but as we all know no family is perfect and so I think it is nice and healthy to see a dynamic like Tom and Elaine’s and the way they exist as mother and son and how unusual it is and it’s probably really healthy for people to see something like that on the big screen and learn from the mistakes they make and hopefully it inspires people to reconnect with their loved ones.

Are you excited about The Winter Lake making its world debut at the Galway Film Fleadh?
I think it’s only the right way, isn’t it? We had so much crew from that part of Ireland and I was so disappointed that circumstances made it that we can’t come over and celebrate because I would love to be there because I remember the crew just talking about going to Galway so I’m gutted I haven’t been and I hope I can come over again for another film. I am excited that it is debuting there because we are all very thankful for all the people from Ireland who helped us.

The haunting coming of age Irish film ‘The Winter Lake’, directed by first time feature director Phil Sheerin will be available on digital download from 15th March across various platforms in Ireland including iTunes, Sky Store, Virgin, Google Play, Rakuten, Chili and IFI@Home and is currently available for pre-order on iTunes: The Winter Lake.