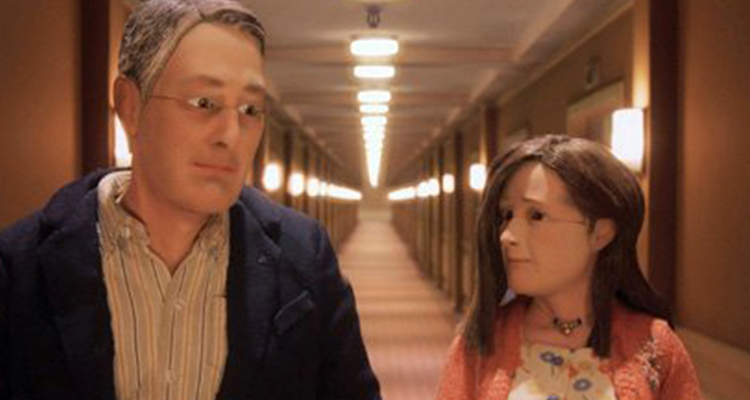 The Best Animated movies for Grown-Ups

‘Anomalisa’, Charlie Kaufman’s first big screen outing since ‘Synecdoche, New York’ in 2008, is released in Irish cinemas this week. A stop motion film, funded via Kickstarter, ‘Anomalisa’ is the story of Michael Stone (David Thewlis), who reutrns to Cincinatti to give a conference on customer service. While there, he dredges up old memories from the past, and thinks he finds kinship in Lisa (Jennifer Jason Leigh). The trouble is that Michael sees no differences between the people in his life, and it is not long before Lisa begins to blend into the background.

The days of animated films being just for kids is long gone – especially with ‘Anomalisa’ being nominated for a Best Animated Feature Film of the Year at the Oscars – but there are still precious few being produced with grown ups in mind. Movies.ie have gathered together some of the best grown up animated films to celebrate the release of ‘Anomalisa’. Keep reading to find out more.

A SCANNER DARKLY
Based on the novel of the same name by Philip K. Dick, ‘A Scanner Darkly’ is set in the not too distant future, when America has finally lost the War on Drugs. Bob Arctor (Keanu Reeves) is an undercover cop, who has been assigned the task of infiltrating the supply chain of the new and popular drug Substance D, which causes bizarre hallucinations. Of course, Arctor becomes addicted to the drug he is trying to eradicate, and his life, and perceptions of the world, take a drastic turn.

Directed by Richard Linklater, ‘A Scanner Darkly’ also stars Rory Cochrane, Robert Downey Jr., Winona Ryder and Woody Harrelson. The film was shot over the space of two weeks, then retro-fitted to be an animated film using interpolated rotoscoping. The film was praised on its release in 2006 and won awards from Critics’ Associations around the US.

THE CONGRESS
Starring Robin Wright as a version of herself, the film version of Wright is an aging, out of work actress who has devoted much of her life to her family. When she is called into Miramount Studios, she believes she will be offered the role of a lifetime. Instead, studio boss Jeff (Danny Huston) wants to offer her the last job of her career; a process where she is scanned and captured on computers so her likeness will keep performing, but will never have to again. Reluctantly, Wright considers the offer, although the consequences are further reaching than she could possibly imagine.

The first act of ‘The Congress’ is live action, with the second half dedicated to a dreamlike style of animation that underlines this strange new future that Wright finds herself in. There are times when ‘The Congress’ feels almost a little too crazy to be accessible, but thankfully the film is anchored by Wright, both in the live action segments and through a strong and engaging voice performance in the animated segments. The film as critically praised and went on to win a European Film Award for Best Animated Film in 2013.

PERSEPOLIS
Based on Marjane Satrapi’s autobiographical graphic novel of the same name, ‘Persepolis’ is the story of a bright and outspoken girl growing up in Iran during the Islamic Revolution. The film is animated in black and white – to recreate the feel of the graphic novel – and takes a look back on Satrapi’s life and experiences during a time of turmoil in her home country of Iran.

‘Persepolis’ has won critical acclaim and holds a 96% approval rating on Rotten Tomatoes. That said, the film has garnered criticism from the Iranian government, who claim the film misrepresents the achievements and results of the Islamic Revolution. As well as this, the film was initially banned in Lebanon, and caused a demonstration after it was shown on Tunisian television. Despite this, ‘Persepolis’ was nominated for the Academy Award for Best Animated Feature, a Golden Globe and won a Jury Prize at the Cannes Film Festival.

FRITZ THE CAT
Ralph Bakshi’s feature film debut was based on the comic strip ‘Fritz the Cat’ by Robert Crumb. The film follows an anthropomorphised student cat as he romps through this X-Rated film full of sex, violence and some moments of racial stereotyping that may have been socially acceptable in the 1970s when the film was released, but are rather uncomfortable now.

‘Fritz the Cat’ was born to be the antithesis of the cutesey talking animals of the time, but although it went on to make $90 million world wide against a budget of $850,000, Robert Crumb – creator of the character – was none too pleased with the film, and even went so far as to get his name removed from the film’s credits. Although the film has become something of a cult classic, this is definitely not one for the little ones in the audience.

WALTZ WITH BASHIR
Directed by Ari Folman – the same man who brought us ‘The Congress’ – ‘Waltz with Bashir’ follows Folman as he searches for the memories he lost as a result of the 1982 Lebanon War. The film is unusual in that it is a feature length animated documentary, and although the film may look similar to ‘A Scanner Darkly’ it was actually produced in a manner much closer to traditional animation than the method that Richard Linklater used on his film. ‘Waltz with bashir’ is the story of a soldier trying to remember the terrible things he has blotted out, making the R Rating the film was given in the US completely justified.

‘Waltz with Bashir’ is banned in Lebanon since it depicts a violent time in the country’s history, but was critically well received and nominated for an Oscar for Best Foreign Language Film in 2009.

‘Anomalisa’ is released in Irish cinemas on March 11th 2016. Watch the trailer below…