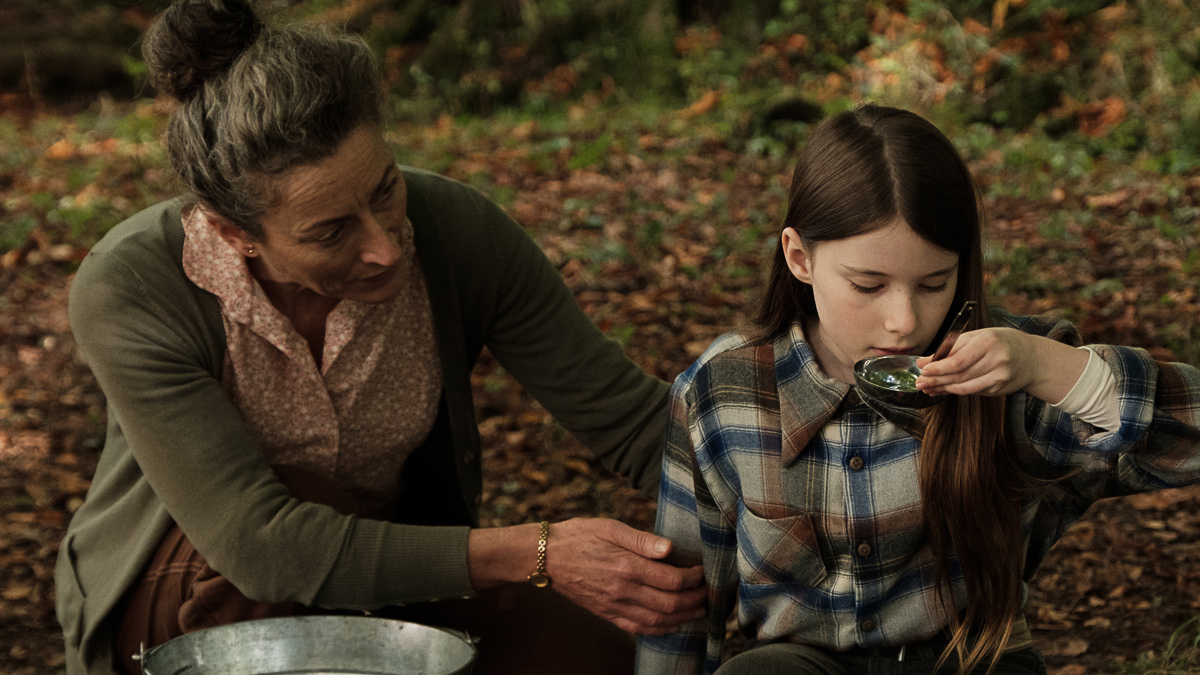 The Plot: Rural Ireland, the early 1980s. Cait (Catherine Clinch) is something of an unloved child. Her mother doesn’t spend much time with her, too occupied by her incoming new baby. Her father cares even less, dismissing her as a child who will eat someone out of house and home. That’s why she’s packed off to her aunt Eibhlin (Carrie Crowley) and her gruff farmer husband Sean (Andrew Bennett) for the summer. A quiet girl, she’s very much unused to having attention from adults. Eibhlin takes to her immediately, welcoming her into the house. She and eventually Sean introduce her to new things and a different, more open way of life…

The Verdict: It doesn’t happen very often with films, but it’s certainly happened with the latest Irish-language feature to hit cinemas – An Cailin Ciuin / The Quiet Girl. Within only the first few minutes, it becomes as clear as the summer sun that the audience is on to something quite special. That’s a rare feat for not only a director making his fiction feature debut, but also his young leading lady who had taking acting classes but had not been in front of a film camera before. It’s that sense of a film that knows exactly what it wants to be and doesn’t attempt to be anything more than that. It sticks within its parameters of a young girl discovering what it means to be a child again, but also reconnecting with the adults that she looks up to for guidance. Within its beautiful simplicity lies its layered complexity in portraying adult-child relationships in their various forms, while subtly breaking your heart in an unsentimental way.

It’s based on the short story Foster by Claire Keegan, adapted here by director Colm Bairead. The short story format is ideal for this particular story and its onscreen delivery, given that there’s not a huge amount of plot or backstory to fill in the blanks. Like its origins, the film is a compressed view of a space in time. That being an idyllic childhood summer in rural Ireland that goes too quickly and with the gnawing dread of school and therefore normality returning in time. Except for Cait, normality means returning to her parents – not a welcome prospect. Bairead strips back the dialogue and concentrates on small moments that bridge the gaps between Cait and her temporary guardians – toes being scrubbed in a bath, a biscuit left on a table, a moonlit chat about the magic of the sea. It’s these small but significant moments that add up to something cathartic for these three characters. Cait is healing them as much as they’re healing her. She’s seeing the world of adults through a child’s eyes, but finding that human connection that she’s been denied up to this point.

What’s really striking about this rather lovely film is how much is left unsaid between the characters, particularly when it comes to Cait’s parents. Like Celine Sciamma’s recent film Petite Maman, it requests some level of audience involvement as it draws them deeper into its story and relies more on performance and staging to sell its tender narrative. With that in mind, young Catherine Clinch is something of a revelation here. In her performance there’s a wisdom behind those soulful eyes, a child quietly crying inside waiting for validation from an adult. A child needs love and belonging to grow, as much as a plant needs sunlight and water. That is ultimately the message of the film. Bairead isn’t trying to rock the boat or get into some parental tug-of-war battle over Cait – leave that for the Hollywood version. One of the most effective lines in the film comes from Eibhlin (an excellent Carrie Crowley), as she whispers to a sleeping Cait that if she was her mother, she wouldn’t send Cait away to a house of strangers. Indeed. An Cailin Ciuin is something of a quiet wonder then, a film loaded with deep-rooted meaning but so elegant and subtle in its delivery that only the hardest heart will be left unmoved. If you see only one Irish-language film this year, then this is it.

In short: A quiet wonder