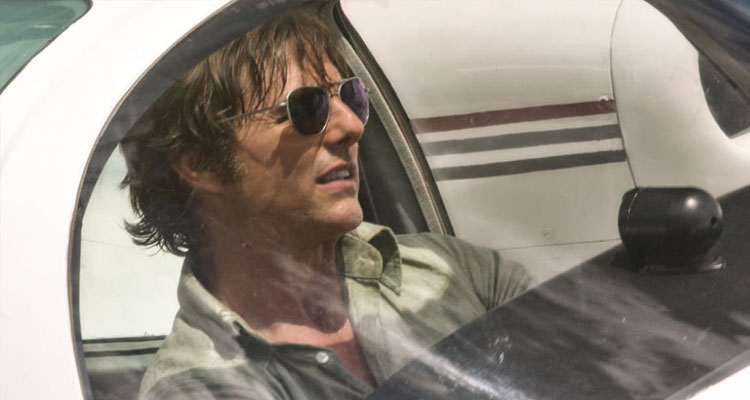 AMERICAN MADE (USA/15A/115 mins)
Directed by Doug Liman. Starring Tom Cruise, Domhnall Gleeson, Sarah Wright, Caleb Landry Jones, Jesse Plemons.
THE PLOT: Civilian aircraft pilot Barry Seal (Tom Cruise) has a line going smuggling Cuban cigars into the US. He’s caught by CIA Agent Schafer (Domhnall Gleeson). Instead of jail time, Barry is recruited into the CIA as a covert pilot. Flying low over South American countries, he takes photos of insurgents and military camps. All of this is unknown to his wife Lucy (Sarah Wright) and his children. Schafer moves him to a sleepy Arkansas town, where Barry’s operations expand. His actions draw the attention of the infamous Medellin cartel in Colombia. Barry is soon diverting AK-47s to Colombia rather than Nicaragua and assisting in drug smuggling into the US. He’s wanted by everyone, but his wealth and fame make him untouchable. Then things get really complicated…
THE VERDICT: After his economically-made but inventive indie ‘The Wall’, Doug Liman returns to mainstream filmmaking with ‘American Made’. Re-teaming with Tom Cruise, Liman’s latest is based on a true story. It would have to be a true story (of sorts) to be in any way credible. For this is a mind-boggling, multi-strand story that just couldn’t be made up. Truth is certainly stranger than fiction. Writer Gary Spinelli plays up the Tony Montana-style myth of the ‘American Dream’ here, but makes Barry’s commitment to his family a priority too.
Barry Seal was something else. A cocky and supremely confident man who laughed danger in the face, he found himself in some pretty hairy situations, playing different sides (CIA, DEA, FBI) off each other. He had so much money that he ran out of space at home to hide it – which is the butt of a number of jokes. It’s a role that is clearly tailor-made for Cruise, his innate charm and movie-star quality making the character funny and engaging. It’s a much better fit for him than ‘The Mummy’, in which he was miscast. As the plot twists and turns like crazy, Cruise anchors it all and manages to keep Barry grounded even in the most unlikely of situations.
It’s a bright and breezy caper, but that comes at a narrative cost. There’s little attempt to dig deeper into Barry’s psyche. In this telling at least, he seemed to say yes to everything asked of him without ever questioning it or seriously pondering the risks to himself and his family. That’s not so much Cruise’s fault – it’s more Spinelli’s. For such a colourful character, the script is surprisingly light on what made Barry tick. Maybe it was the money, the fame, the rush of adrenaline, the power trip… Maybe he was just a small cog in a large machine that kept changing direction. The script never really settles on what exactly. It may lack some substance, but it’s an enjoyable film that boggles the mind as much as it entertains.
RATING: 3 / 5
Review by Gareth O’Connor