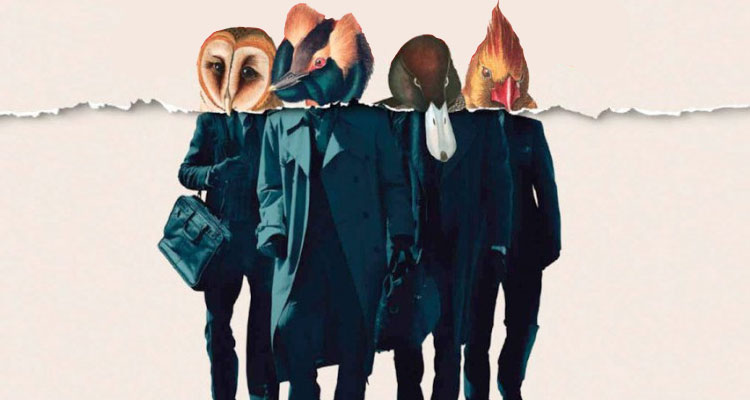 In short: A total blast

The Plot: Kentucky, 2003. College students Warren (Evan Peters) and Spencer (Barry Keoghan) dream of a better life, one which takes them away from the daily grind of sports scholarships or stacking supermarket shelves. Why can’t they be just as cool and successful as Danny Ocean and his gang? That’s when they hit upon the idea that life can be just like a movie – only, you know, for real. They hatch a daring plan to heist a rare and valuable collection of books from their college library, one of which is worth a cool 12 million dollars. Taking inspiration from suitable movies like Stanley Kubrick’s The Killing, they rope in two other conspirators – Chas (Blake Jenner) and Eric (Jared Abrahamson). They might just pull this off. Then again, they’re not Ocean’s Eleven…

The Verdict: Truth is certainly stranger than fiction. American Animals begins with the disclaimer ‘This is not based on a true story’. Then some words disappear to leave ‘This is a true story’. It’s safe to say that the latter is more accurate. Just how accurate is this shaggy dog tale about four near-clueless twentysomethings who thought they had what it takes to pull off a major heist? You won’t be worried too much by accuracy, as this is a terrific thriller which plays with audience notions of unreliable narrators, differing points-of-view and just how much fact and fiction tend to blend together to the point of being hard to distinguish from each other.

Of course, director Bart Layton is a master of this. In the superb The Imposter, he skilfully told a real-life story that was frankly unbelievable. Can people really be that gullible and dumb? So it seems. He’s obviously attracted to the way movies and real life intersect, finding the middle ground between them where anything is possible. That’s certainly true of American Animals, which like The Imposter melds a narrative re-enactment by actors with the now older, real guys who sit sombre in their homes, reflecting on their misspent youths. The overall impression is that of ‘If only I could write a letter to my younger self.’

That added element of the real with the re-enactment is done so smoothly and subtly by Layton that it raises the film to an even higher level. What could have been a quirky heist film about four no-hopers soon becomes a riveting examination of selective memory and just what constitutes the truth. At one point, Layton has the actor and the real guy in the same car, just to distort what we’re watching. He even rewinds a covert meeting with a New York fence to show it from a different character’s perspective. This doesn’t come across as deviously designed though. It’s all part of Layton’s master plan to show that there are three versions to any story – my story, your story and the truth.

The weight of conscience also bears down on the characters/real guys, as they realise they might have to hurt someone. They’re not bad guys. They’re just regular joes who want a shot at The American Dream. If this all sounds heavy-going, it’s not really. American Animals is a total blast from start to finish. From the quality cast (including our own rising star, Barry Keoghan) to the nervy, throbbing energy of the music and tense scenes in which the heist might just be pulled off, there’s no doubt that you’re in the hands of a talented director. Layton is manipulating you, but in a way that is benign and rather amusing. American Animals is undoubtedly one of the year’s most distinctive films and is therefore unmissable.