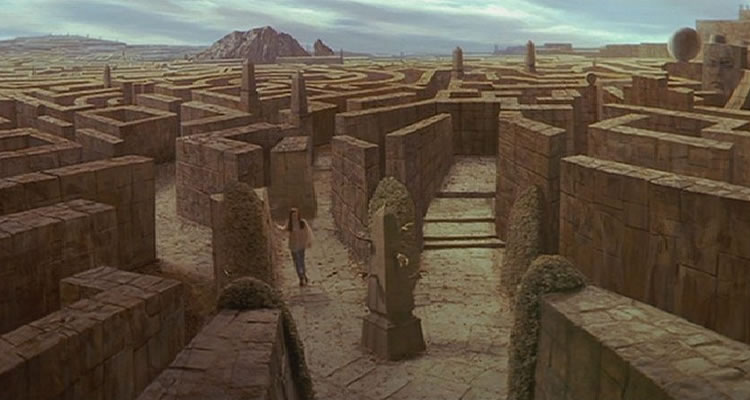 Traversing the sub-genre of Young Adult Adaptations can be a bit of a tricky one, for every Twilight or Hunger Games, you’ve got The Host or The Mortal Instruments. One series that does seem to have solved the puzzle is The Maze Runner, as the 2014 franchise starter did quite well with both critics and the box office alike. With the sequel The Scorch Trials due to hit cinemas on Sept 10th (featuring our very own Aidan Gillen), let’s cast our eye over some of cinemas greatest mazes!

There was no way we couldn’t mention one of the movie’s most famous mazes, as on top of tidal waves of blood, ghost butlers and insanity-inducing isolation, the Overlook Hotel boasts a giant hedge maze, which eventually stands in for the climactic foot chase as a demonically possessed Jack Nicholson chases his scared witless but supernaturally powered young son through the snow, ice and identical passages. While we can’t follow it up with any kind of proof, we’re still pretty certain that this movie single-handedly destroyed the hedge-maze business, if there ever was one.

Guillermo Del Toro’s uniquely brilliant Spanish language fantasy tells the story of a young girl who tries to escape the real world – specifically her brutally violent stepfather – and enters an initially magical world that soon shows it’s true colours as being much, MUCH darker than she’d imagined. Creating the Labyrinth was no easy task, but it all paid as the movie went on to win the Academy Awards for Best Make-Up, Best Art Direction and Best Cinematography, and only lost out on Best Foreign Language Movie to the equally fantastic The Lives Of Others.

HARRY POTTER & THE GOBLET OF FIRE

The fourth entry in J.K. Rowling’s young adult juggernaut found The Boy Who Lived being entered into a Tri-Wizard Tournament against his will, and the final test involved all the competitors having to traverse a magical maze that twisted you, tricked you and turned on you at a second’s notice. At the centre of a maze was the Tri-Wizard Cup, except it wasn’t! It zapped Harry to the presence of Voldemort for the first time, and (SPOILERS!) resulted in the very emotional death of fellow competitor Robert Pattinson. Thankfully, he had another Young Adult series coming up on the horizon…

Not unlike the characters of the first Maze Runner movie, the folks involved in this 1997 sci-fi/horror woke up in a room with no memory of how they got there. Each room they enter requires solving a puzzle that will open the door to the next room, but should they get the puzzle wrong, there is a very violent punishment waiting for them all. The small budget hidden gem is probably the least seen movie on here, but definitely worth seeking out. Writer/director Vincenzo Natali has stayed within the sci-fi and horror genres, releasing 2009’s Adrien Brody-starring oddity Splice, directing several episodes of the TV show Hannibal, plus the upcoming psychological thriller In The Tall Grass.

While the plot of the movie relied on dreams within dreams within dreams, it also revolved around mazes within mazes within mazes. Leo DiCaprio’s subconscious-infiltrator required a genius architect, played by Ellen Paige, to come up with designs for everything from staircases to entire cities which will prove to be navigable but also impossible to escape from if you don’t know how. That’s all well and good, but there’s really only one thing we want to know: did the totum stop spinning at the end? Or not? Just a “Yes” or “No” will do, Nolan! We NEED to know!

Terry Gilliam’s fantasy classic follows 11-year-old Kevin (Craig Warnock) as he hops between time periods with a gang of thieving dwarves who fell out of his wardrobe, in search of treasure. Of course, the most valuable treasure – ‘the most fabulous object in the world’ – is kept through a labyrinth that Kevin and his new friends must navigate in order to survive. Greed knows no bounds in TIME BANDITS, as the dwarves steal treasure from several famous time periods in history, before they are forced to face the maze to gain their ultimate prize.

Five years after the release of TIME BANDITS, David Bowie stepped into some shiny leggings, and an enviable mullet, to play Jareth the Goblin King in Jim Henson’s LABYRINTH. Sarah (Jennifer Connolly), is a young teenager who, after her baby brother will not stop crying, wishes ‘Goblin King! Wherever you may be take this child of mine far away from me!’. Once Jareth obliges and Sarah realises her mistake, she sets out to solve the labyrinth and bring her brother home.
Filled with catchy songs and some fancy puppet work from Jim Henson and Co, LABYRINTH is not only a fantastic example of a menacing maze, but a darn good 80s adventure flick.

1973’s Enter The Dragon starring Bruce Lee was famous for its House Of Mirrors end sequence, where Bruce Lee learns it is best to smash the glass obstacles to solve his problem and defeat the villain. It went on to influence numerous other fight scenes in a hall of mirrors including 1974’s ‘The Man With The Golden Gun’ and 1984’s Conan The Destroyer.

HELLBOUND: HELLRAISER II
The sequel to Clive Barker’s 1987 British horror film Hellraiser finds the original film’s only survivor trapped in a mental institution, crawling through Hell itself, imagined here as an ever changing dark labyrinth filled with monsters.

YOUR HIGHNESS
We swore we’d never mention the awful 2011 comedy starring Danny McBride, James Franco and Natalie Portman ever again but it gets an honorable mention here for Charles Shaughnessy who actually played a maze in the movie. It’s as barmy as it sounds.

THE MAZE RUNNER: THE SCORCH TRIALS is in Irish cinemas from September 10th