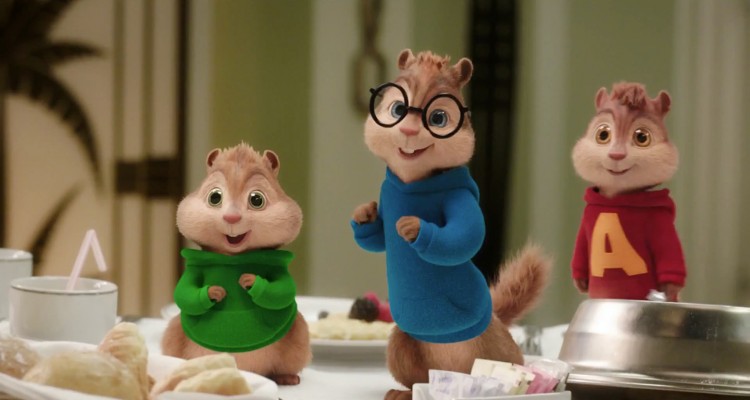 ALVIN & THE CHIPMUNKS: THE ROAD CHIP

ALVIN & THE CHIPMUNKS: THE ROAD CHIP (USA/G/92mins)
Directed by Walt Becker. Starring Jason Lee, Retta, Tony Hale, Justin Long, Matthew Gray Gubler, Jesse McCartney.
THE PLOT: In this fourth instalment of the Alvin and the Chipmunks franchise; the three chipmunk brothers fear that Dave (Jason Lee) is going to propose to his new girlfriend Samantha (Kimberly Williams-Paisley), meaning they will be saddled with Samantha’s bully of a son Miles (Josh Green). In order to stop this from happening, and to save their family, Alvin and the boys set out for Miami to ruin the proposal.
THE VERDICT: It is hard to imagine that this is now the fourth film to feature Jason Lee as keeper to a bunch of singing chipmunks, but here we are. Although the cancellation of Lee’s excellent TV show ‘My Name is Earl’ was a tragedy, this is not to blame for this squeaky and bland franchise, since he starred in the first film when he was still playing the well-meaning Earl on the small screen.
Lee does fine in the role of Dave, although he is basically playing a more competent version of Earl and doesn’t have a whole lot to do in this new film. Kimberly Williams-Paisley is fairly bland as the love interest and Josh Green plays the bully well, and the character’s all too sudden change of heart is not the actor’s fault. The voices of the chipmunks meanwhile, are Justin Long, Matthew Gray Gubler and Jesse McCartney. The film features cameos from a host of famous faces, including ‘Parks and Recreation’’s Retta, ‘Orange is the New Black’’s Uzo Aduba and perhaps most surprisingly, John Waters, whose presence is simply used to make a joke about his 1972 film ‘Pink Flamingo’s. As well as thee, Tony Hale turns up as an obsessive air marshall and his over the top, ridiculous shenanigans manage to make this cinematic wreck just about watchable.
Randi Mayem Singer and Adam Sztykiel’s screenplay is littered with painfully self conscious references to social media and reality TV – the Chipettes are apparently off to host American Idol – and awkward references to popular culture. The songs seem to come out of nowhere, although the extras always seem to have a choreographed dance routine ready to go.
Director Walt Becker does little to make ‘Alvin and the Chipmunks: The Road Chip’ less than awful, although parents who think the lyrics to ‘Baby Got Back’ are fine but have concerns about some in ‘Uptown Funk’ will be happy with the watered down versions of the songs in the film. ‘Alvin and the Chipmunks: The Road Chip’ is badly paced, and storylines are left to dangle without being wrapped up. As well as this, the CGI looks fairly shoddy.
In all, ‘Alvin and the Chipmunks: The Road Chip’ is probably best viewed by the youngest members of the family; adults in the audience will gain nothing from this thin, unentertaining and unfunny ‘comedy’ littered with jaded references to pop culture and new cover versions of overplayed songs.
RATING: 0/5
Review by Brogen Hayes