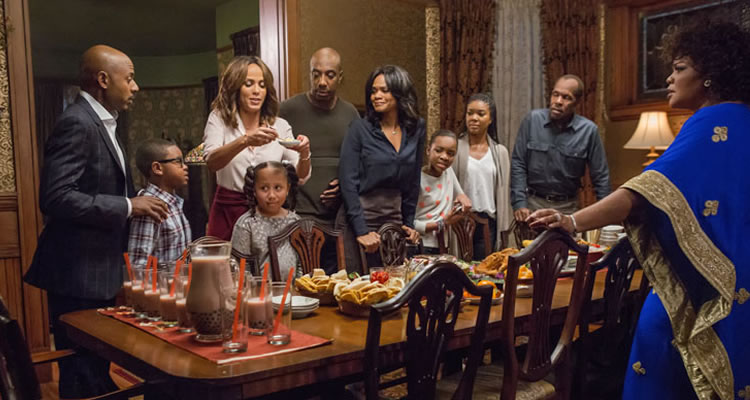 ALMOST CHRISTMAS (USA/12A/111mins)
Directed by David E. Talbert. Starring Danny Glover, Omar Epps, Gabrielle Union, Kimberly Elise, Mo’Nique
THE PLOT: After the matriarch of the family died earlier in the year, the Meyers family gathers together for Christmas together, but of course it is not long before old resentments and new problems begin to arise in the family.
THE VERDICT: ‘

Almost Christmas’ follows a familiar course; a dysfunctional family coming together to shout out their resentments and bring up old arguments once again. Danny Glover plays Walter, the head of the family, a man grieving the loss of his wife, and plays the character in a sad and nostalgic manner, which does not always fit with the rest of the film. Mo’Nique takes on the role of Aunt May, the stereotypical sassy black woman who threatens to whoop everyone’s asses if they do not stay in line. Elsewhere in the film Gabrielle Union plays Rachel, one of the daughters of the family who has a long standing feud with her sister Cheryl (Kimberly Elise). J.B. Smoove makes Uncle Lonnie annoying and self involved, and Jessie T. Usher does similar with the youngest son of the Meyers family, Evan. The rest of the cast features Romany Malco, Nicole Ari Parker and Omar Epps, who is completely underused.
The screenplay, written by David E. Talbert, who previously brought us the lacklustre ‘Baggage Claim’, follows familiar and obvious story points. Talbert does very little to make the film feel any different to any other Christmas family movie you care to mention. Old resentments and new arguments are the name of the game, and most of the cast spend the film shouting at one another over something or other, with the youngest members of the family filming everything on their phones. The dialogue feels familiar and derivative, and nothing other than the predictable ever happens in the film. Having Walter fixate on a recipe of his wife’s and his determination to make a pie the way she used to is a nice touch, but it gets lost in all the yelling and the random dance breaks.
As director, David E. Talbert spaces ‘Almost Christmas’ out over the five days leading up to Christmas, but the pacing of the 118 minute running time is uneven and leaves the film feeling drawn out and slow. The actors are never given a chance to make the characters feel real, rounded or relatable in any way.
In all, ‘Almost Christmas’ is familiar and derivative, with many of the actors being underused in creating thin and unlikeable characters. The film is badly paced and many of the supposed jokes are drawn out and more awkward than funny. There are plenty of great Christmas movies out there, but ‘Almost Christmas’ is nigh on intolerable, and certainly not one of them.
RATING: 1/5
Review by Brogen Hayes