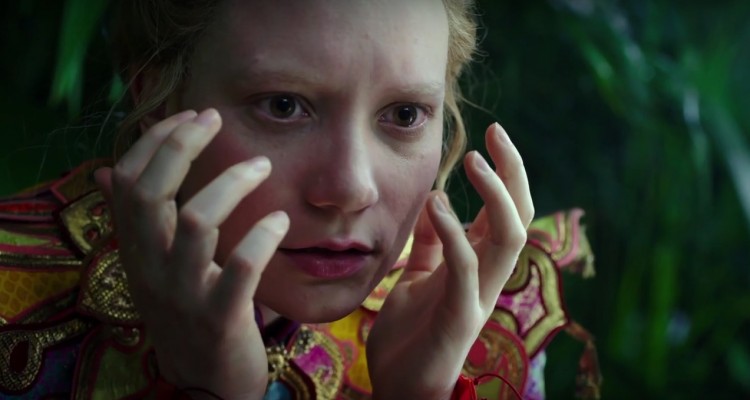 Alice Through The Looking Glass

ALICE THROUGH THE LOOKING GLASS (UK/USA/PG/113mins)
Directed by James Bobin. Starring Mia Wasikowska, Johnny Depp, Helena Bonham Carter, Anne Hathaway, Sacha Baron Cohen, Matt Lucas, Alan Rickman, Stephen Fry, Timothy Spall.
THE PLOT: With The Mad Hatter (Depp) fading fast because no one believes him when he says his family is still alive, it’s left to Alice (Wasikowska) to travel to Time himself (Baron Cohen) in the hope of rewriting history. Also trying to bend Time’s ear though is the wicked Iracebeth (Bonham Carter), determined to get her revenge on her goody-goody sister, Mirana (Hathaway), and finally wrestle the reigns of the kingdom from her. Stealing the Chronosphere, Alice jumps back in time, in the hope of saving the Mad Hatter’s family, and, by extension, the Mad Hatter himself, but such a move puts Time on a countdown to death. And the Red Queen on the warpath…
THE VERDICT: There’s plenty going right in Hollywood these days, especially when it comes to comicbook franchises, but ‘Alice Through The Looking Glass’ is a great big shining example of how it can all go horribly wrong too in these Franchise Is King times. A sorry sequel to an even sorrier blockbuster smash, the dark sarcasm of Burton and Depp has fallen so very, very far since that 2010 hit that they’ve each become box-office poison. Burton keeps to the shadows these days, retreating ever-more into the indie world in search of a credibility kick, whilst Depp, sadly, has morphed into the new Nicolas Cage.
It doesn’t help that the strangely ageing Depp looks like the child of Madonna and Finbar Furey here.
There are quite a few casualties in ‘Alice Through The Looking Glass’. Hands up who cares about one-time Oscar contender and box-office sweetheart Anne Hathaway these days? And poor James Bobin, taking the helm on the Titanic after making his mark with ‘Flight Of The Conchords’ and then experiencing both the joy and the pain of Hollywood with, respectively, ‘The Muppets’ (2011) and ‘Muppets Most Wanted’ (2014). With Burton retreating to the safety of a producing role here, poor Bobin has been handed something of a poisoned teacup here. Sure, the first ‘Alice’ outing made over a billion, but that’s when teenagers would flock to anything Johnny did, especially when it was with his longtime partner in gothic grime, Dr. Tim. The dullness of that movie, along with the likes of ‘Charlie & The Chocolate Factory’ and ‘Dark Shadows’, put paid to that blind, rabid fanbase though.
And how difficult must it have been for Depp and Carter here – once part of two golden, bestest bud couples who had the world at their feet, and adoring kooks at their electric gates, and now dealing with all kinds of shrapnel crazy?
The only saving grace here is Sacha Baron Cohen as Time, delivering the movie’s handful of funny lines, and somehow managing to convince in a world of over-saturated CGI and drowning box-office champs.
RATING: 1/5
Review by Paul Byrne