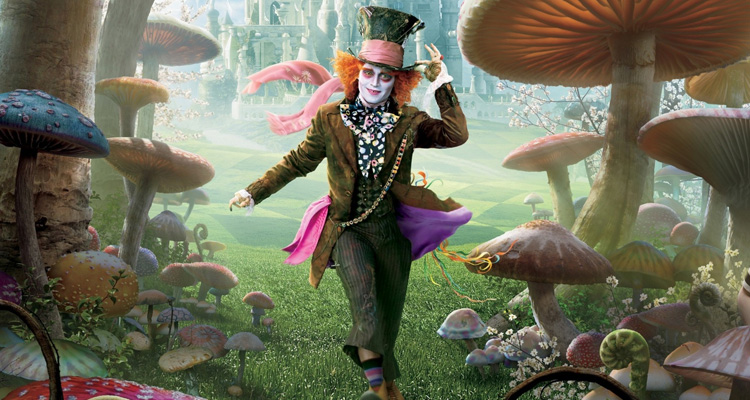 Alice Through The Looking Glass In Numbers

6 Years
First published in 1865, fans of the original Alice novel had to wait 6 years for the sequel ‘Through The Looking Glass And What Alice Found There’. Now the movies follow a similar pattern with exactly 6 years between the release of Tim Burton’s ‘Alice In Wonderland’ in 2010 and this month’s highly anticipated sequel.

$1 billion
Tim Burton’s version of ‘Alice In Wonderland’ earned a whopping $1billion at the global box office, enough to make it the 22nd highest grossing movie of all time.

35,000 man hours Director James Bobin shot much of the new film on practical sets (12 in total) at Shepperton Studios outside London. The biggest was the town of Witzend, which took 16 weeks and 35,000 man hours to construct. The set had 13 buildings and included the Hightopp hat shop, a clock shop, a sweets shop, several houses and a castle.

90,241 Feet
Twenty-one blue screen environments employing 90,241 feet of blue screen were used at Shepperton during principal photography on ‘Alice Through The Looking Glass’. The largest was for Time’s Castle and the Chamber of the Grand Clock of All Time, which measured 100 feet by 140 feet.

30 Films
There have been over 30 film adaptations of ‘Alice In Wonderland’ to date, the earliest version was a silent movie filmed in 1903.

1000 Extras
Over 1,000 extras were used over the course of production on the latest movie, including everything from party guests to townspeople to workers on the shipping docks. Each extra went through wardrobe, hair and make-up on a daily basis.

1700’s
‘Alice Through The Looking Glass’ used a number of real life historical buildings from the 1700’s, including Winston Churchill’s former home The Ditchley Manor in Oxfordshire and a house on Craven Street in London where Benjamin Franklin lived for 16 years (the only remaining home of his in the world). Exteriors of Alice’s childhood home were filmed on Fournier Street in East London, where the homes date back to the 1720s and are all important examples of early Georgian architecture.

62 Ton Ship
‘Alice Through The Looking Glass’ required a full-size replica of a ship weighing 62 tons, a deck measuring 120 feet by 25 feet was built on a gimbal at Longcross Studios. Thirty-two people were needed to operate the ship’s gimbal, the 12 wave tip-tank towers, the wind machines and the water tanks.
900,000 Litres

Approximately 900,000 litres of water were used during filming of the storm sequence in ‘Alice Through The Looking Glass’

Zero Wastage
‘Alice Through the Looking Glass’ was an environmentally-conscious production. Leftover timber was donated to a local school and fabric off-cuts were given to a group called TRAID (Textile Recycling for Aid and International Development). In addition, sheets and towels purchased for U.S. crew housing were donated to homeless charities, and over 20 tons of leftover food was composted, including cutlery and crockery, all which were biodegradable and made from plant materials.

27
The date in May when ‘Alice Through The Looking Glass’ will open is May 27th. Mark your calendars for this very important date!

ALICE THROUGH THE LOOKING GLASS IS IN CINEMAS FROM MAY 27th