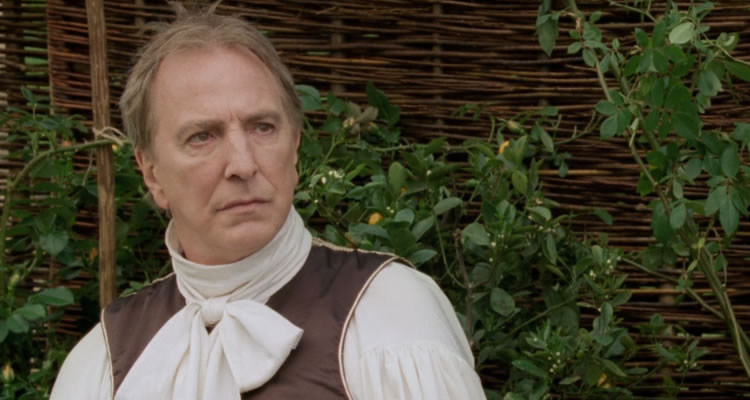 We talk to the director and star of A LITTLE CHAOS…

Best known for his iconic roles in movies like DIE HARD, the HARRY POTTER franchise and GALAXY QUEST, Alan Rickman has turned his hand to directing twice, originally 16 years ago in THE WINTER GUEST and again this month with his new movie A LITTLE CHAOS, which tells of the design and building of the iconic gardens at the Palace of Versailles.
The film stars Kate Winslet, Matthias Schoenaerts and Stanley Tucci, alongside Rickman himself; we caught up with Rickman on a recent stop to Dublin.

How did it feel to get back in the director’s chair after 16 years?
Alan Rickman: It didn’t feel like such a long break because I had been directing quite a bit in the theatre in between times, so it’s just the same activity with a lot more help. [laughs] In many ways, on every film set that you love, it’s collaborative anyway, so there’s always the same level of conversation going on, it’s just the same set of conversations, except I’m the one that gets to say yes and no at the end of them.

A LITTLE CHAOS feels a little like a fairy-tale mixed with a message about surviving tragedy, was that part of the appeal for you?
AR: Yeah; the fact that it’s got a very fantastical backdrop, but actually it’s quite a true- felt modern story about a man and a woman, and the balancing act that we’re on with partners. I love the fact that, at the end of the film, she says ‘And us?’ and he says ‘We will shape each other’. I find that incredibly necessary in modern thought.

Louis XIV is a relatively small but pivotal character. Did you always want to play him?
AR: No, and I tried hard not to, but it was a case of economics. You add up the numbers, and here’s an actor you don’t have to pay immediately. It makes the sums add up, and the producers just say ‘You’re playing it’.

You said you didn’t want to play Louis XIV necessarily, so how did you find the balance of directing and acting at the same time?
AR: It’s not easy. You need the help of other people who are looking down a lens, like Ellen Kuras the DP. The fact that my scenes with Kate are very much a conversation, so you can feel when it’s right, when you’re just talking to each other and it’s being caught on camera. I suppose the fact that there is such a watchful nature to somebody called Louis XIV, it’s a very isolated existence, and there were enough parallels with the life of being a movie director, and you could see the mindset of a movie director might be his mindset.

The Gardens of Versailles are stunning, but in the film they almost become a character of themselves. Can you talk about that?
AR: It’s one garden that you watch being made; an outdoor ballroom and that’s where reality does intrude… Because of course Kate’s character couldn’t have possibly existed. It’s total active imagination from [screenwriter] Alison Deegan, but that outdoor ballroom at Versailles does exist. They can unlock a key and you can go in a gate, and there it is. Sometimes the fountains work as well. [Production Designer] James Merifield did an amazing job of reproducing that in England.

What do you hope audiences take from the film?
AR: I hope that they see their own lives in it somewhere, and it isn’t really about Louis XIV and the 17th century French Court, that somewhere in there there’s something that they can hug to themselves and say ‘I’ve had a private relationship with these people, and I can see myself in there somewhere’. I hope that, as you say, they have laughed. I know that a few Kleenex packets get opened at various points [laughs] and there’s no harm in that. I hope it’s that old-fashioned thing of a group of people go to the movie theatre, the lights go down, and they get told a story. It becomes rarer and rarer for that to happen.

You’ve played so many iconic characters of cinema over the years – from DIE HARD to HARRY POTTER – what do people quote at you the most?
AR: It’s as much SENSE & SENSIBILITY or TRULY MADLY DEEPLY, or LOVE, ACTUALLY. From nowhere suddenly we’ll start talking about DOGMA, a film that they love. GALAXY QUEST is a film that anyone’s who’s found it, loves, because it’s that rare thing… Genuinely funny. DIE HARD is never off, and it’s a great movie because they bothered to get a script, these days I don’t think many action movies take the time to do that. It’s all about the writing.

A LITTLE CHAOS is in Irish cinemas from April 17th 2015