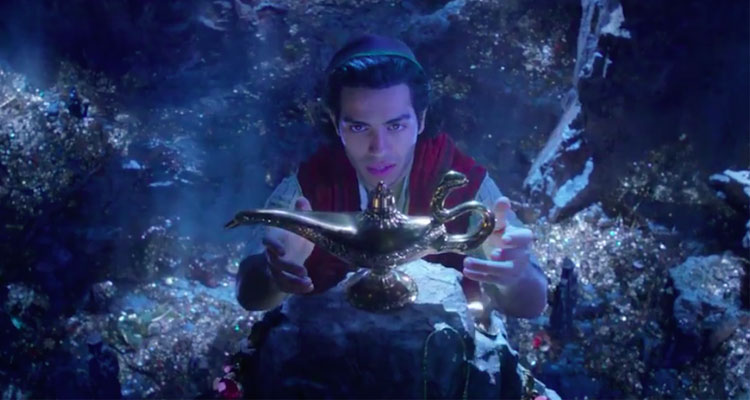 The Plot: Street urchin Aladdin (Mena Massoud) is a cheeky thief but with a good heart. His only friend is pet monkey Abu. In the marketplace, he runs into Princess Jasmine (Naomi Scott), though he doesn’t know it’s really her. He’s enchanted by her and attempts to win her heart despite his lowly status. Grand Vizier Jafar (Marwan Kenzari) spots a certain talent – Aladdin may be the ‘diamond in the rough’ who could steal a powerful magic lamp that contains a genie. Aladdin does just that and escapes with the lamp, whereupon he releases the motormouth Genie (Will Smith) and is granted three wishes. He must choose wisely. With the help of the Genie, he tries once again to win Jasmine – now under the guise of a prince…

The Verdict: Disney’s raiding of its classic animated back catalogue for conversion into live action films continues apace with one of its most popular films – 1992’s Aladdin. It’s best remembered for the late Robin Williams’ outstanding vocal work. Turning it into a live action film comes with both benefits and hazards. Live action brings the chance to scope out the story a bit more and bring the human element to the fore. The main hazard is how to top Williams’ performance, which seemed to poke out of the traditional animation to make the genie very much his own. That was long before the kind of performance capture that is evident in this new take, which switches from the Genie’s muscle-bound idealised version of himself to the everyday charisma of Will Smith. Despite reservations, it works though and drives the film forward.

Part of the charm of the new live action Aladdin is its boundless enthusiasm, energy and constant explosion of colour. There’s one man guiding it all. Guy Ritchie, purveyor of geezer-type crime films and bloated historical epics like King Arthur: Legend Of The Sword, seems like an unlikely choice for a family-friendly Disney film with earworm songs and clearly-defined good guys and bad guys. He’s on form here though, bringing that street sensibility to likeable rogue Aladdin that has defined his films as a director, for better or worse. He conforms to the Disney formula, but doesn’t let it blunt his particular style of filmmaking. While his direction does veer close to pantomime at times (particularly in a rousing cast encore), he directs with plenty of style in the song and dance sequences. He also hints at darker things – but not too dark. This Aladdin is ultimately a blast of desert sunshine.

In a move in the right direction towards representation, the ethnic casting works well and film newcomers Mena Massoud and Naomi Scott make for a charming couple. They also crucially have good sets of lungs, belting out one great tune after another. Marwan Kenzari’s Jafar is fine, though he could have been more deliciously, hand-rubbingly evil. He’s more of an opportunist with grand plans, rather than a boo-hissable villain. Most importantly though, Smith gives his genie a flair for the theatrics, but with a slightly contemporary edge. His performance-capture blue genie grates on the nerves initially, but wins you over soon enough with his playful sense of humour and buddy-comedy friendship with Aladdin. It’s equally successful when Smith is his normal self (a dance sequence in which he puppeteers Aladdin’s alter-ego prince is laugh-out-loud funny). Think of it not so much as better or worse than Williams’ performance, but a different take that works in its own particular way – like Ben Affleck as Batman.

Disney are certainly on a roll with these live action remakes and there’s plenty more to come, with the big one – The Lion King – coming in July. Unlike the significantly reworked recent take on Dumbo, this Aladdin is both faithful to the original but shoots off in its own directions like a firecracker. The explosions of colour throughout, from the costumes to the you-are-there production design, ensure that it never gets boring even as it stretches past the 2-hour mark. It’s a surefire hit that is a whole lotta magic.