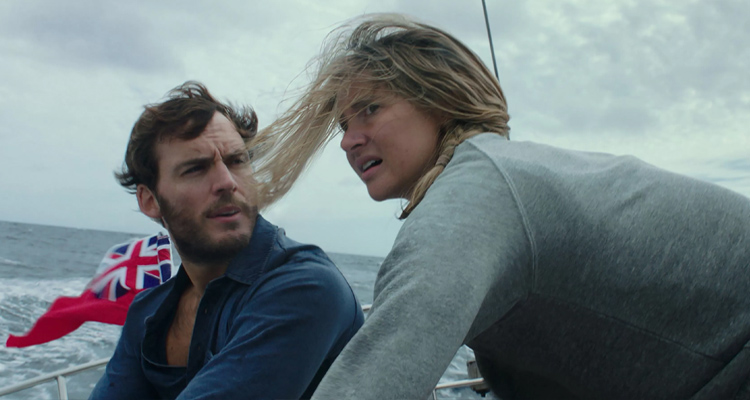 The Plot: 24-year-old Tami (Shailene Woodley) wakes up on a damaged, waterlogged yacht in the high seas between Tahiti and the West Coast of America. She searches desperately for her boyfriend Richard (Sam Claflin), who was swept overboard. After making some repairs to the boat, she locates him. He’s in bad shape, with broken legs and ribs. Far from land and with food and water running out, Tami will have to step up to the plate and sail them home as they battle against the elements…

The Verdict: Adrift is based on the true story of Tami Oldham and Richard Sharp. In 1983, they set sail from Tahiti to San Diego in a friend’s yacht. They found themselves caught in Hurricane Raymond, which sent them way off course and left them adrift with a very real possibility of a death by starvation in the blue, watery expanse of the Pacific. It’s an inspirational story, in which a young woman battles for survival against a harsh and unforgiving landscape – much like Robyn Davidson’s story recently told in Tracks.

Having conquered Everest, Icelandic director Baltasar Kormakur returns to the water with this story adapted from Oldham’s book. He chooses an unconventional approach towards the narrative, starting half-way through and then moving backwards and forwards in time to tell the love story between Tami and Richard. By intercutting these sequences, he builds towards the impending disaster. This has some benefits, in that we see Tami and Richard in contrasting high and low points along with a gut punch to get the audience on their side right away.

Inevitably when you play around with film timeframes, something is lost in the process (unless you’re Quentin Tarantino of course). Despite the best efforts of his two talented leads, they never quite convince as a couple. There is chemistry there, but it’s soufflé-light and not given the breathing space to develop into a fully-formed relationship. The film really needed something stronger and more vital here, to plaster over the watery holes in the script. There’s a big hole towards the end of the film which Kormakur skips past quickly, as if he didn’t want you to notice what he’s been up to in recounting this gripping story.

That said though, the film is handsomely mounted. Kormakur knows his environments well and is very much at home with survival stories. The climactic storm is well-staged with nary a hint of CGI, while always keeping the sea as a benefit / hazard at any moment. Having lost weight for the role, Woodley gives a physically demanding performance which pushes her range as an actor. Though, one feels that Kormakur could have pushed her further if the script and narrative structure had been more focused. Adrift is fine for what it is – a decent, plain sailing retelling of a dangerous voyage which pushed human endurance and courage. There’s more to this story though, which is why the film loses a star overboard.