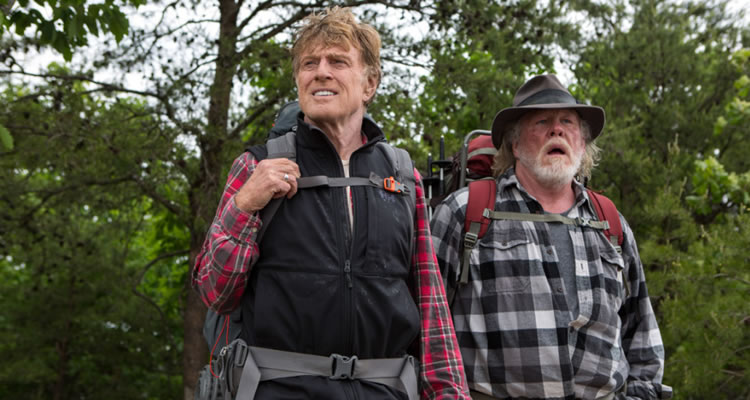 A Walk in the Woods

A WALK IN THE WOODS (USA/15A/104mins)
Directed by Ken Kwapis. Starring Robert Redford, Nick Nolte, Emma Thompson, Kristen Schaal, Mary Steenburgen, Nick Offerman
THE PLOT: Travel author Bill Bryson (Robert Redford), goaded by a TV anchor who berates him for not travelling around America, decides to set out on the Appalachian Trail; a walk that takes 5 months, and 5 million steps. Bryson’s wife Catherine (Emma Thomspon) forbids him from doing the hike alone, so an old friend – Stephen Katz (Nick Nolte) –is drafted in for the walk.
THE VERDICT: Despite the fact that Bryson and his friend Katz were 44 when they set out to hike the Appalachian Trail, both Redford and Nolte are in their 70s in the film. Originally punted as a film to reunite Redford with his Butch Cassidy co-star Paul Newman, the film is finally released in Irish cinemas this week.
Redford is likeable as Bryson; wry and funny, with a sense of adventure. The trouble is, we never get to know much more about the character than this, meaning this famous travel writer comes off slight in the film. The same goes for Nick Nolte as Katz, a womanising man with outstanding warrant and some misogynistic views, Nolte is never really given a chance to make the character anything more than an old-fashioned goof. The rest of the cast is made up of Emma Thompson, Nick Offerman, Mary Steenburgen, and Kristen Schaal as a self involved hiker who thinks she knows everything.
Rick Kerb and Bill Holderman’s screenplay tries to make this an odd-couple story about two old friends getting to know one another again on the trail. With recent films about enduring hikes in mind, such as Wild and The Way, this lighter approach would have been welcome if we actually got to know these characters beneath the superficial. Even when they are seemingly stranded the conversation rarely turns to anything deeper than the fact that Bryson loves his wife. Also, some sympathy for the characters is lost after they have several conversations that both body shame and degrade women.
Director Ken Kwapis makes the film slight and likeable for the first half, but once the men venture into the woods, and the audience craves something deeper from the men, the tone does not change. The film is well shot however, with the 800 mile walk from Georgia that the two complete looking wonderful and lush.
In all, ‘A Walk in the Wood’s is slight and unrewarding. Misogynistic dialogue does not help matters, nor does the fact that we never truly get to know these characters, and they don’t ever seem to learn anything, except maybe that they should have stayed in touch more.
RATING: 2/5
Review by Brogen Hayes