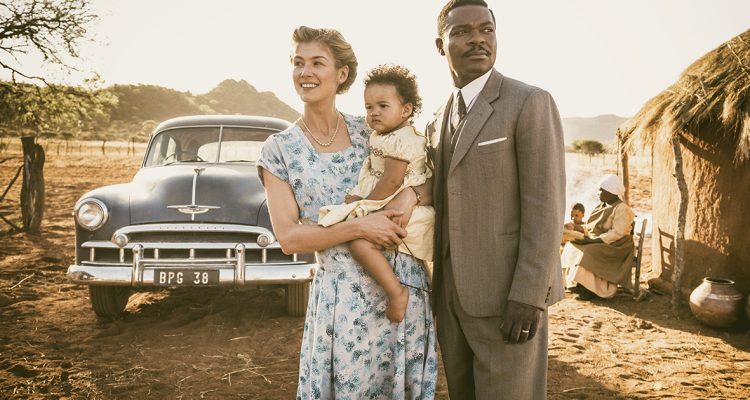 A UNITED KINGDOM (USA | UK | Czech Republic/12A/111mins)
Directed by Amma Asante. Starring Rosamund Pike, David Oyelowo, Jessica Oyelowo, Tom Felton, Jack Davenport
THE PLOT: In 1940s London, Ruth Williams (Rosamund Pike) and Seretse Khama (David Oyelowo) fall in love and plan to marry. The trouble is that this marriage between an English woman and an African man, heir to the throne of Bechuana Land, is not only scandalous due to the couple’s races and ethnicities, but threatens the political system both at home and in Africa.
THE VERDICT: ‘A United Kingdom’ is based on a true story, and brought to the screen by Amma Asante; ‘Grange Hil’l actress turned director, in her third feature length project as director after ‘A Way of Life’ in 2004 and ‘Belle’ in 2013.
Rosamund Pike leads the cast as the headstrong but graceful Ruth Williams, and she does the character justice as she struggles to find a place where she belongs when the fact of who she has fallen in love with leads to her being ostracised. David Oyelowo is charming and sweet as Seretse Khama, making the character graceful and strong, but softer and gentler than his headstrong wife. The two work well together, and the chemistry between them is clear on screen. The rest of the cast features Jack Davenport, Tom Felton, Laura Carmichael and Jessica Oyelowo.
Guy Hibbert’s screenplay addresses an important story in the struggle for equality between black and white people, in both the UK and Africa, but even though the love story at the centre of the film is strong, it is not long before ‘A United Kingdom’ gets caught up in politics; the squabbling between family members, the introduction of apartheid in South Africa and the hunt for precious minerals are all touched on in the film, which goes some way toward diminishing the facts at the heart of the tale. There is so much going on here that it is hard for the audience to know what to hang on to, and while the love story is ever present, it is not brought to the fore enough for the film to be hung upon it.
As director Amma Asante gets strong performances from Pike and Oyelowo, and their chemistry on screen is natural and warm, but it is in the minutiae that Asante struggles to keep the film moving, and make the issues as clear as they should be. As well as this, there are times when emotion borders on saccharine sweetness, so while the story is worthwhile, it gets somewhat cloying and overly sweet at times.
In all, ‘A United Kingdom’ could be a powerful story about love and equality, but it gets bogged down in exploring the political choices that led to governments getting involved in a romance. Pike and Oyelowo are strong, but both the actors and their subjects deserved a stronger script and direction that what they got.
RATING: 3/5
Review by Brogen Hayes