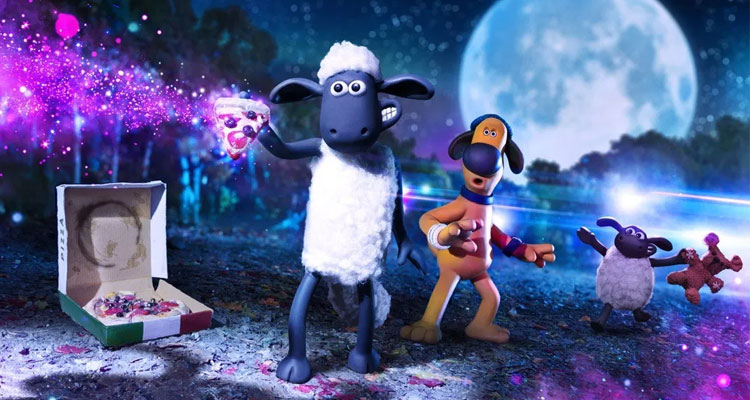 A Shaun The Sheep Movie: Farmageddon

In short: Out of this world

The Plot: The sleepy English village of Mossingham has become a hotbed of UFO activity. The locals are obsessed with possible sightings, to the point where a farmer (John Sparkes) wants to build a theme park with the help of Shaun The Sheep (Justin Fletcher) and his dog Bitzer (also Sparkes). Shaun has a close encounter of the third kind one night when he runs into a blue and purple, floppy-eared alien by the name of Lula. She’s ended up on Earth by accident and now needs the help of Shaun and the other farm animals to return to her faraway home in another galaxy. However, a secret Government agency is on her trail, intent on capturing her…

The Verdict: The hand-made labour of love that is an Aardman Animation production is endearingly old-school, painstakingly using stop-motion animation to bring their plasticine characters vividly to life. The Bristol-based studio builds in a tactile quality to their characters which CGI cannot replicate, so you almost want to reach into the screen and touch them. Their latest treat for audiences is A Shaun The Sheep Movie: Farmageddon, a follow-up to the first film from 2015. It’s that rare thing: a sequel that not only builds upon the qualities of the original, but sets out to improve it and take its characters on new adventures and in exciting new directions.

As with its predecessor, dialogue is merely a trifle. Guttural grunts and gibberish talk are the order of the day here, mostly sidestepping talking animal syndrome (a dreary curse of many a family film). That allows co-directors Will Becher and Richard Phelan to concentrate more on packing in as much visual and aural gags as possible, tipping their stop-motion hats to classic science fiction from film and TV. Where else would you see burnt bread rising slowly from a toaster as a tribute to a certain Stanley Kubrick film? Not in a Pixar film, that’s for sure. Only Aardman would be so quirky and cheeky. The story is endearing, as Lula is a cutesy alien who is curious about Earth lifeforms and their cuisine, especially pizza. This results in the film’s funniest scene in a supermarket (and far beyond), as Lula guzzles everything in sight.

Shaun gets more to do in this film, as he tries and sometimes fails to get Lula home, along with the help of the put-upon dog Bitzer. Their budding friendship is touching, a sort-of Elliott and E.T. with a farming angle. There’s also a shadowy Government agent on their trail – one with a snoopy robot who mouths beeping sounds (keeping up the handmade feel). This potential clash climaxes in an ED-209-style chase towards the end, which brings further levels of visual inventiveness into the mix. For a film that is a mostly visual experience, there’s a lot to take in and savour in just one viewing. With the stop-motion animation playing out on a widescreen canvas, there’s an epic scope to the action which is set in and around a small village – the epic and the intimate in one.

A Shaun The Sheep Movie: Farmageddon is sure to delight children and their parents alike. It certainly went down well with the families at this reviewer’s screening, being engaging and funny enough for children and packed with geeky references for their parents to spot. There’s a lovely story about intergalactic friendship, but it’s thankfully not preachy like some animated family films can be. Shaun is as crafty and resourceful as ever, making this a winning film in many respects and a superior sequel. Aardman hadn’t made a feature-length sequel up to this point, so Farmageddon is a risk. It pays off though and is out of this world.