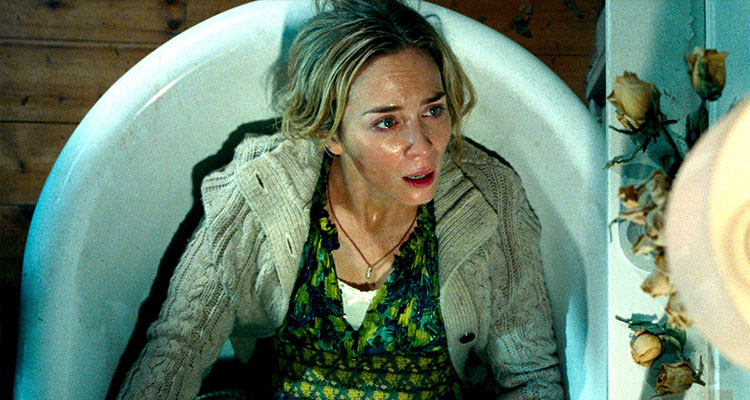 The Plot: Society has broken down due to unspecified reasons. Those who are left are survivors, waging a war of silence against a mostly unseen, deadly enemy. They live by one simple rule: keep quiet. The enemy reacts to any large noise, attracted to it like a shark to blood. This is where we find rural nuclear family The Abbotts – Lee (John Krasinski), his wife Evelyn (Emily Blunt), sons Marcus (Noah Jupe) and Beau (Cade Woodward), along with their hard-of-hearing daughter Regan (Millicent Simmonds). When sound rings out in the house one night, they’re all in for a long night of terror…

The Verdict: A Quiet Place arrives in a wave of hype, fresh from its rapturous premiere at the South By Southwest Festival in Texas. With a 100% fresh rating on Rotten Tomatoes (at the time of writing), it has a lot to live up to. Thankfully, it delivers – and then some. This is a deceptively simple horror film that makes excellent use of its high concept. For once, here’s a high concept film that knows what to do with itself and how to manipulate its audience – in a positive way of course.

The detailed script by Bryan Woods, Scott Beck and actor/director John Krasinski narrows its focus to just one location and one family, in much the same way as M. Night Shyamalan did with Signs. By doing that, they strip away any unnecessary plot devices like cutaways to major cities or a more detailed explanation as to what’s really going on. It’s enough just to suggest it, as there’s plenty to marvel at here. The story of this family under siege is rooted in strong bonds between Lee, Evelyn and their children. That makes it as much an emotional rollercoaster as a suspenseful one.

For a director who confesses to being a scaredy cat when it comes to horror, Krasinksi shows a remarkable degree of restraint balanced with a devilish sense of all-out terror. He sets down the rules of his world early on with a shocking opening, then builds the story from there over time. Amid all the stalking in the dark, there are some beautifully judged moments like the waterfall scene – when our characters can finally talk due to their voices being masked by the cascading water. It may appear that it’s a quiet film with little dialogue, but there’s actually plenty being said.

By adding other dimensions to the story – Evelyn’s pregnancy, Regan’s hearing problem – Krasinski ups the ante. These are all done in very subtle ways, without ruining their impact. It’s a well-judged and finely acted film with a rousing closing shot that might just warrant a sequel. A Quiet Place is taut and suspenseful, marking out its territory from standard horror fare. It certainly stands shoulder-to-bloody-shoulder with others of its ilk like It Follows and Don’t Breathe.