The Plot: Deep into survival mode, Evelyn Abbott (Emily Blunt) and her children Regan (Millicent Simmonds) and Marcus (Noah Jupe) have narrowly avoided a nasty close encounter of the third kind. Staying as quiet as they can, Evelyn decides that staying put is no longer an option if they want to survive against the sound-hunting creatures. This is when they encounter neighbour Emmett (Cillian Murphy), now a lone burnt-out survivalist who helps them – but only so far. Regan has other ideas and is intent on using her new-found weapon to fight back and offer hope for those who remain on this quiet Earth…

The Verdict: ‘A Quiet Place Part II is a classic horror film. Cinema is back’. So tweeted William Friedkin recently, the maverick director of The Exorcist. High praise indeed for this long-awaited sequel, one of the earliest victims of the pandemic. Not a victim anymore though, as like the brave Abbott family in this series, triple-threat writer/director/actor John Krasinski is striking forth and aiming to bring audiences back to the big screen. As he so succinctly put it earlier this year, we’ve waited long enough. It’s the ideal film to welcome audiences back to cinemas after an agonisingly long wait for them to re-open while we dealt with our own threat. It’s not so much the huge screen in front of you, but the sound. This film has a remarkable soundscape that jumps from moments of quiet to suspense to terror, made all the more impactful by sharing this cinematic experience with other people around you. Remember how tense the audience was for the first film, when even the rustling of popcorn was noticeable? That tension is back bigtime.

Krasinski wisely sidesteps the typical issues that plague sequels to wildly successful originals – repeating the same formula, introducing too many new characters, letting special effects dominate over character. Instead, he builds on the foundations of the first film and the apocalyptic world that he etched in brushstrokes. Here, he broadens his strokes to escalate the story of the surviving members of the Abbott family and thereby up the stakes as they find a way to fight back against the creatures. The daytime opening sequence is a terrific short film in itself, a flashback to Day 1 when everything went south very quickly. Krasinski then picks up the story mere seconds after the first film ended, as the shotgun-toting Evelyn gathers her children and heads into the wilderness to find some sort of answer. What she finds is not what she expected.

It’s to Krasinski’s credit that he maintains the same tight focus on a few survivors in a limited area of space, while allowing this new story room to breathe and move about. There are no cutaways to the White House and a desperate President making a last stand. There are no helicopters or fighter jets in heroic formation to take on the intruders. Just normal people trying to survive in extraordinary times – something we can all identify with. This is where one main new character comes to the fore – Cillian Murphy’s Emmett. Initially, he appears to be a supporting character but as the film progresses he becomes increasingly important along with Regan. Murphy and his chemistry with Simmonds here is spot on, as she brings out the humanity in Emmett after he’s misplaced it. They’re not foolhardy characters either. They’re as equally terrified as the audience will be and it’s this which grounds the film so successfully.

This does come at a narrative cost though. Blunt’s sturdy earth mother Evelyn is pushed somewhat into the background in the third act. A surprising move on Krasinski’s part considering that he’s married to the leading lady. Let’s hope there weren’t arguments about that over the dinner table. It’s a small price to pay though as it allows Simmonds to develop her character more, from being the most vulnerable to the most defiant and heroic. It’s a great showcase for the young deaf actress, who first came to attention in Todd Haynes’ Wonderstruck. Krasinski confidently directs action setpieces with visual flair and an ear for the mysterious and unknown. His direction is taut and focused throughout, leaving just enough unsaid to hint at a possible third film – which he already has ideas for. A Quiet Place Part II is a solid and thrilling sequel that ratchets up the high tension to 11 and reminds audiences why we gather in darkened movie palaces to watch a well-told yarn. Cinema is indeed back. 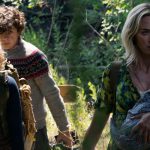