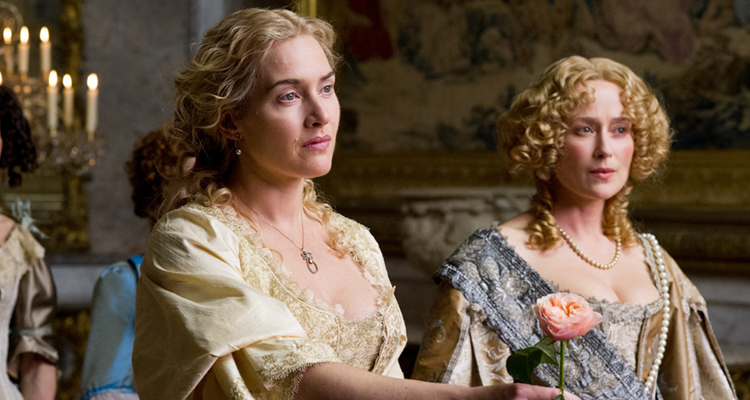 THE PLOT: Sabine de Barra (Kate Winslet) is a landscape gardener with grand designs, designs which she submits to André Le Notre, the man who is designing the gardens at Versailles for King Louis XIV. When Sabine is awarded a project at Versailles, she finds herself not only dealing with jealous and spiteful competitors, but the demons from her past and some new friends.

THE VERDICT: Alan Rickman’s second film as director, when described in synopsis, sounds like an old-fashioned romantic bodice ripper, but in truth, it is an examination of grief, renewal and the role of women in 1680s France.

Kate Winslet is on fine form as Sabine de Barra; she is feisty and strong, while remaining gentle and kind. Winslet also conveys the idea that de Barra is a woman struggling to come to terms with tragedy, and this is carefully shown on screen. Matthias Shoenaerts brings strength and kindness to the role as lead gardener André Le Notre and Stanley Tucci is hilarious, marvellous and completely over the top as Duke Philippe d’Orleans, bringing colour and laughter to the screen. There are also plenty of giggles to be had in the initial scenes between Rickman – as Louis XIV – and Winslet. Rickman has a wonderful way of showing a wealth of emotion through the smallest of expressions, and this is what he excels at here. The rest of the cast is made up of Helen McCrory, Jennifer Ehle, Steve Waddington and Pauline Moran.

The story, written by Jeremy Brock, Alison Deegan and Alan Rickman fictionalises parts of the move of the French monarchy from the Louvre to Versailles, mainly by adding the character of Sabine de Barra. This allows the film to have an emotional centre, but it also opens it up to some melodrama, that doesn’t always work. There seems to be a heck of a lot going on with de Barra – she’s fighting for recognition for her work, she’s taking on a new love affair, trying to deal with being the flavour of the month at the Royal Court, and come to terms with her own personal tragedy – that something has to give in the film, and something eventually does. Trying to throw so much in de Barra’s way leads to the film feeling messy and, certainly in the final act, disjointed.

Rickman directs with an even hand, and allows the comedy and drama to weave together well. There are times where drama gives way to melodrama, and these are the moments at which the film suffers. For the most part, however, the feel of the film is gentle and light, with Ellan Kuras’ cinematography, James Merifield’s Production Design and Joan Bergin’s Costume Design making the film feel sumptuous and beautiful.

In all, A LITTLE CHAOS is beautiful, sweet and funny, but ends up being as chaotic as the title may suggest. The film starts off well but, in trying to spin too many plates, the film inevitably allows some to fall. Strong performances and some warmhearted laughs almost make up for this, but A LITTLE CHAOS is let down by its third act, and trying to do too much in too short a time. Still the road to the end is an enjoyable one.