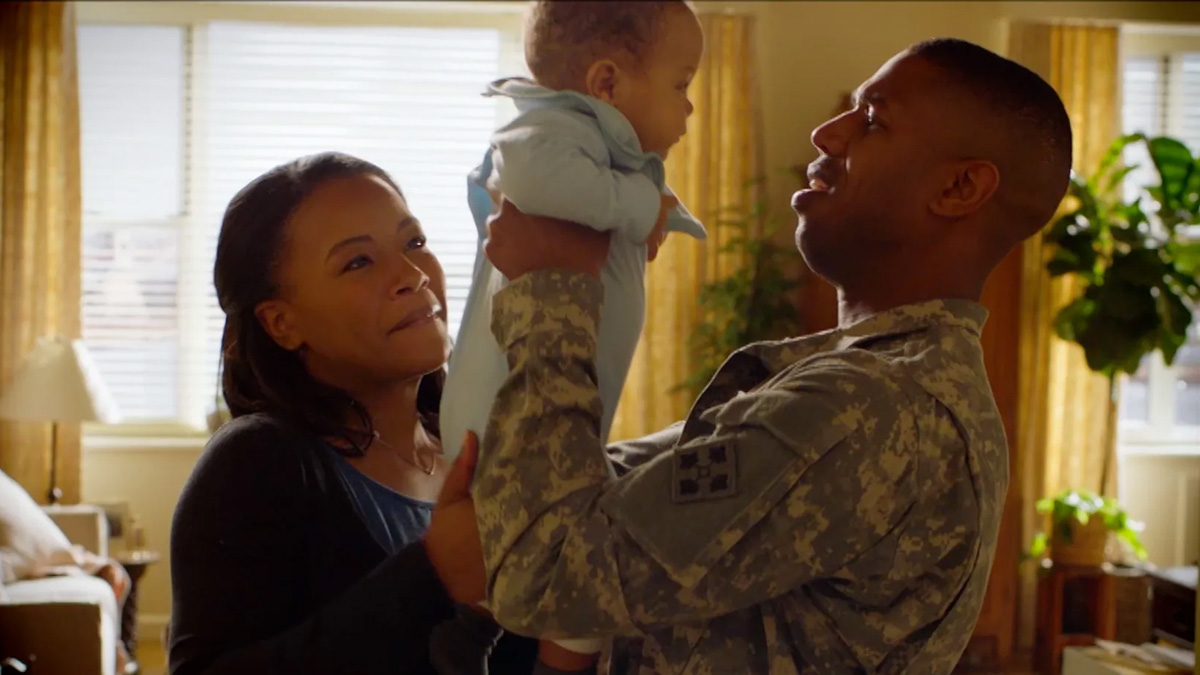 The Plot: New York journalist Dana (Chante Adams) has recently got out of a relationship. Not looking for anyone new just yet, she nonetheless fixes her eyes on soldier Charles (Michael B. Jordan) as he positions a drawing he’s done in her family home. He’s come to visit his old sergeant, her father T.J. (Robert Wisdom). They strike up a cross-country acquaintance, which gradually blossoms into a romance. As time passes, Charles begins to relate the story of his life and the lessons he’s learned to his newborn son Jordan (Jalon Christian) via a journal which he writes while in combat following 9/11…

The Verdict: Denzel Washington. He’s the man. The double Oscar-winning actor recently blew audiences away with his sturdy take on The Tragedy Of Macbeth and is now gearing up for a third installment of The Equalizer. Lesser known is the fact that he’s also a director when the megaphone and the director’s chair come calling, having made Fences back in 2016. His fourth film is A Journal For Jordan, a true life story about the late Sergeant Charles Monroe King. He wrote a journal for his young son Jordan to read when he came of age, consisting of life lessons and a code of honour to live by to fill in the gap left by his unfortunate absence. Adapted by Virgil Williams from King’s journal and his partner Dana Canedy’s book, Washington takes the typically American reverential approach towards its military heroes. Nothing wrong with that at face value given King’s honourable duty to his country, but did the film adaptation have to be so damned earnest in the process?

This is the danger with tackling a true story like this. Get the right tone, dramatic grit and depth of character and you end up with a successful transition to the big screen like Clint Eastwood’s American Sniper. While Eastwood has spent his elder years exploring American heroism in its various guises, Washington is less sure-footed when it comes to telling a similar story. At its heart, it’s mostly a very tender if somewhat muted romantic story following some 20 years in the lives of Dana as she looks back on her relationship with Charles and watches their son grow into a young man as sensitive and perceptive as his late father. The role of the journal gets less focus and attention than the title would otherwise suggest. When the journal does finally come into play, Washington seems to regard it as an afterthought rather than the narrative catalyst that it should be. If the journal is as important as it seems, it should be driving the story forward rather than focusing mostly on domestic scenes that are hit-and-miss on the drama scale.

The film is perhaps too low-key for its own good. Washington is a careful and considered director, but he never quite grasps this story with both hands in order to make a proper emotional impact. There’s too much mellow in this drama, coming across as a TV movie of the week weepie that happens to be elevated by better actors. Speaking of whom, Michael B. Jordan and Chante Adams make for an attractive couple with decent chemistry throughout. They manage to keep the slightly overlong film watchable, if not quite as impactful as one would have hoped for. Jordan in particular continues to mature as an actor of note, with an understatedness and quiet resolve which shows his range beyond his signature Apollo Creed role. Washington has a good eye for young actors too, with Jalon Christian making the most of his later scenes with Adams. Those scenes hit the right emotional beats, so why does Washington wobble with the overly earnest and sentimental tone elsewhere in the film? A Journal For Jordan is an OK film for what it is, but like Washington’s previous film it won’t leave you on the fences when it comes to deciding whether he’s a better actor than he is a director.