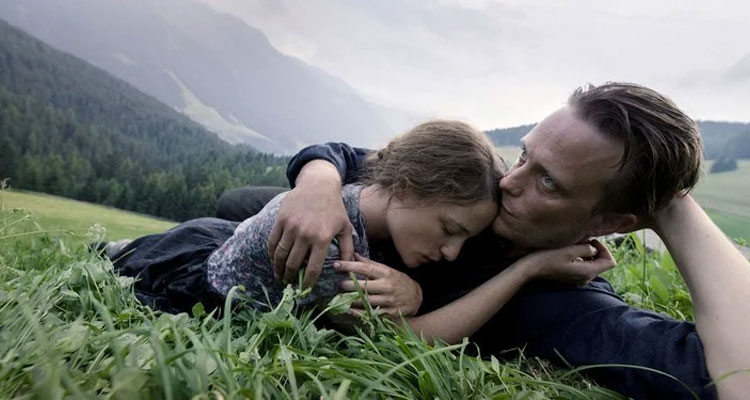 In short: A quiet revolution

The Plot: Austria during WWII. Far from the ravaged battlefields, Franz Jagerstatter (August Diehl) lives in an idyllic rural community with his wife Fani (Valerie Pachner) and their three young daughters. He’s a farmer who does his part for the war effort and in time he’s called to do military service. Upon his return though, he’s a changed man. He comes to the realisation that he doesn’t know why he’s fought this war and what its purpose is. This causes ripples in his mountain community, as he refuses to acknowledge Adolf Hitler. When he’s once again called to fight for the fatherland, he fervently resists the oath of loyalty he must make to Hitler…

The Verdict: The cinema of Terrence Malick can be an acquired taste. The reclusive American maverick has had (by his standards) an extraordinary bout of creative output in the last 22 years since he returned to our screens. Unlike say Francis Ford Coppola, he’s a director who thrived on the creative freedom of the 1970s but also made the transition to working within the modern studio system. His recent contemporary films have had varying degrees of success, but some of them have been self-indulgent affairs loaded with starry casts with little to appeal to anyone other than his faithful admirers like this one. That’s about to change. His new film A Hidden Life is his best and most accessible film since The Tree Of Life, reminding us once again of his singular style of filmmaking and ability to distill the essence of pure cinema.

Malick’s script takes as its subject one Franz Jagerstatter, an Austrian farmer who in real life rebelled against the overwhelming might of the Nazi jackboot in WWII. There have been such stories of mini-revolutions going on under the shadow of the swastika, such as the recent Alone In Berlin. A Hidden Life is very much Malick’s own take on the story of an Austrian conscientious objector and plays to his greatest strengths as a filmmaker. That being his love of nature, the environment being a character in itself, his considered use of music to underscore his characters’ emotions, an emphasis on internal monologues and working with excellent actors who are in tune with what he wants. All of them come into play here in telling the story of how Franz came to revolt against the Nazis and what they represented.

Had this been directed by anyone else, there’d be impassioned anti-war speeches and Oscar-baiting theatrics going on to ram home its point. Malick being Malick, he’s far more subtle and is more interested in the reasoning behind Franz’s actions than the consequences of those actions. He takes his time to set up the unwavering love between Franz and Fani, with both Diehl and Pachner delivering strong performances that are brought full circle in the moving conclusion. At one point when Franz is in jail, he asks Fani if she understands why he’s doing this. She nods. Without the earlier conviction of those performances, that scene wouldn’t work. For added authenticity, Malick uses the actual letters that the couple wrote to each other for the internal monologues.

While it initially appears that Malick is taking nearly 3 hours to tell a relatively simple story of one man raging against the machine, there is a logic to it that becomes apparent. Time is a factor here and Malick is no rush to get Franz to his seemingly inevitable fate. This is a film about ideas and as a fellow revolutionary in V For Vendetta said, ideas are bulletproof. The story needs time to let the audience accept what Franz is doing and what it means for him and Fani. The story sags ever so slightly in some of the prison scenes, but picks up for a powerful, stirring conclusion with a pertinent closing quote from George Eliot. As always with Malick, this is cinema of the senses as his camera swirls around his actors and environments but this is in service to his compelling story. A Hidden Life is a quiet one-man revolution which moves the heart as much as it stimulates the mind.