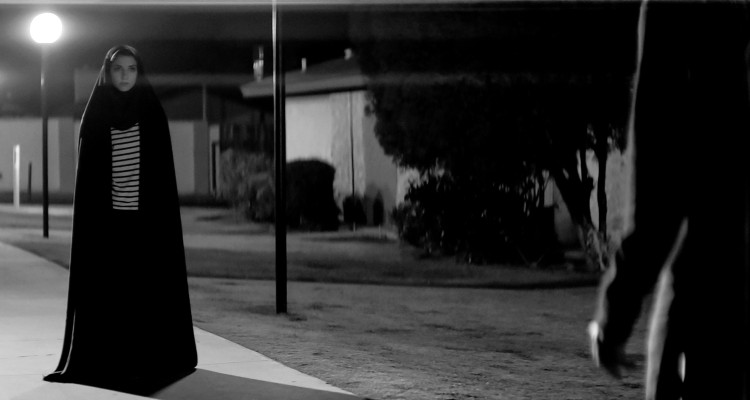 A GIRL WALKS HOME ALONE AT NIGHT (USA/TBC/101mins)
Directed by Ana Lily Amirpour. Starring Sheila Vand, Arash Marandi, Marshall Manesh, Mozhan Marnò and Dominic Rains.
THE PLOT: In the Iranian town of Bad City, the lonely, cruel and desperate townspeople are unaware that there is a vampire in their midst. Clad in a hijab and riding a skateboard, The Girl (Shiela Vand) stalks the residents and exists in solitude, until she meets the lonesome Arash (Arash Marandi).
THE VERDICT: Perhaps not surprisingly, A GIRL WALKS HOME ALONE AT NIGHT is the first vampire Western to come out of Iran, what may surprise viewers, however, is how dark, beautiful and atmospheric this film is, and how universal the story actually is. Although the film is set in Iran, A GIRL WALKS HOME ALONE AT NIGHT could actually be set anywhere in the world, and such is the film’s wonderful charm.
Sheila Vand is mesmerising in the lead role; her curious eyes often seem to fill the screen and although she is not actually the central character in the film, and we learn little about her, she hovers over the whole affair like a ghoul. Arash Mirandi swings between patient and kind, and cruel and opportunistic in the film, but audience sympathy lies with his character, as he is the most innocent and open of the characters. The rest of the cast is made up of Marshall Manesh as Arash’s father Hossein, Mozhan Marnó as Atti and Dominic Rains as Saeed.
Ana Lily Amirpour’s screenplay is one that is not weighed down by dialogue and exposition. Instead, the audience is invited to go on this highly stylised but engaging journey with the characters, as their town’s influence changes due to the presence of one person. Beautifully shot in black and white, the film drips with rich atmosphere and, while there are gory and violent scenes, these are turned beautiful through the black and white cinematography.
As director Amirpour fills the film with tension and a dark atmosphere, while allowing The Girl to take moments of stillness and display odd, twisted kindness to the people she deems worthy of her protection. The film is also an awkward ‘teen’ romance, and the relationship between The Girl and Arash is gentle and rather sweet, making this the film that Twilight wishes it could have been. That said, there are moments when the film’s pacing drags its heels, meaning the still atmosphere begins to stagnate.
In all, A GIRL WALKS HOME ALONE AT NIGHT is a wonderfully dark, twisted and romantic tale with a killer soundtrack and oodles of style. The cinematography and abandoned feel of the town heighten the whole affair, but some dodgy pacing means the film suffers from time to time.
RATING: 4/5
Review by Brogen Hayes