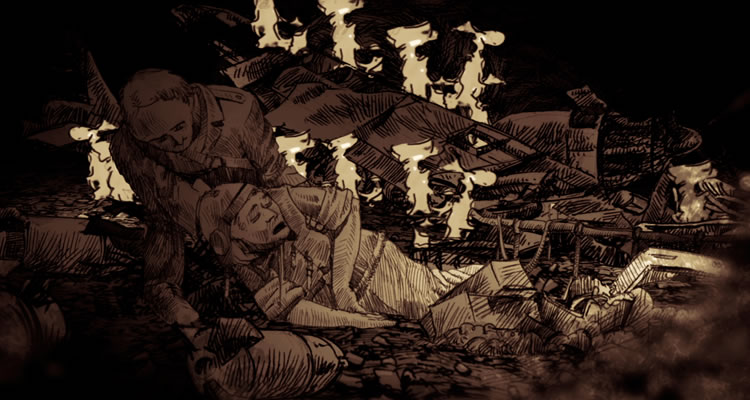 A DOCTOR’S SWORD (Ireland/12A/70mins)
Directed by Gary Lennon. Starring Adrienne MacCarthy, Nicola MacCarthy, Kathleen MacCarthy, Dr. Aidan MacCarthy.
THE PLOT: Charting the remarkable story of the late Dr. Aidan MacCarthy, from Castletownberehaven, West Cork, a repeat survivor during the Second World War, awarded the George’s Cross for rescuing the crew of a burning RAF plane which had landed in a bomb dump, fell to the Japanese whilst serving in Asia, where he suffered 4 years of brutal captivity, later surviving the atomic bomb on Nagasaki whilst a POW there. Oh, and he also survived when being captive on a cargo ship that sank in the middle of the night after being torpedoed.
The strongest momento that his family own of this time – and is proudly on display down in the family’s famous Castletownbere pub – is the sword of a Japanese Samurai sword, given to him by an appreciative officer. And so it is that his daughter Nicola sets out on a journey to find that Japanese officer’s family…
THE VERDICT: A documentary that first appeared on TV3 in a smaller, more succinct form, concentrating largely on the good doctor’s wartime survival stories, director Gary Lennon recognised there was another layer to this remarkable man’s life when the family expressed a desire to source just who it was that gifted their father the eponymous Samurai sword at the end of World War 2. What initially feels like a TV documentary becomes more and more cinemascopic as both the somewhat mindboggling tales of MacCarthy’s series of escapes, endurances and empathy unfold and the search by his daughter 68 years later for the man who clearly recognised the good heart of this brave soldier.
Aided by some sharp animation, we follow those WW2 hardships chronologically, each new medal-worthy bout of heroics bringing a new wave of admiration and awe. Based on MacCarthy’s autobiography ‘A Doctor’s War’, there are times that Lennon’s documentary comes across as an Abe Simpson wet dream, but there’s no denying the incredible life that’s being celebrated here.
RATING: 4/5
Review by Paul Byrne