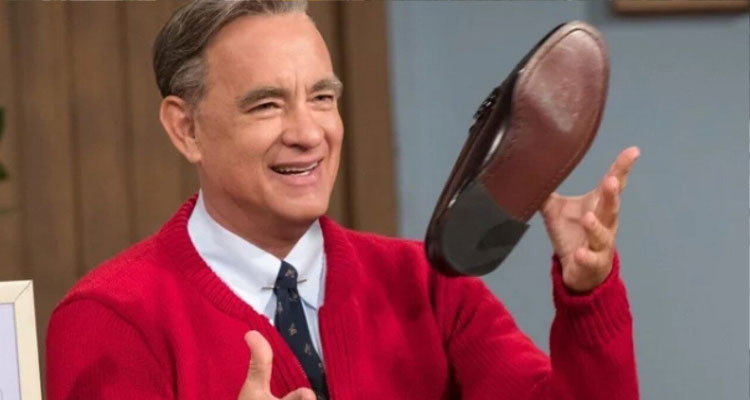 A Beautiful Day In The Neighbourhood

In short: A beautiful film

The Plot: 1998. Jaded investigative journalist Lloyd (Matthew Rhys) has developed a reputation as being a hard-nosed interviewer who doesn’t sugarcoat his subjects. When his editor at Esquire magazine gives him an assignment to write a short piece on American heroes, she gives him Fred Rogers – the famed children’s television show presenter. Known for his friendly, open manner towards people, Fred (Tom Hanks) has done his research on Lloyd as well. Instead of being a one-sided interview, Fred senses that Lloyd is a broken person and starts question him about his bitter abandonment issues with his father Jerry (Chris Cooper). Lloyd finds that there’s far more to Fred than 400 words, so they get to know each other in a neighbourly fashion – with life-changing results…

The Verdict: Fred Rogers AKA Mr Rogers. The name won’t mean much or anything at all on this side of the pond. In America though, the late children’s television presenter is revered and respected as an iconic American personality. His positive persona encouraged children to get in touch with their feelings and understand them better over the course of 33 years on air. The good news about new film A Beautiful Day In The Neighbourhood is that it’s not a cradle-to-the-grave biopic or a preachy piece in utter admiration of the man himself. Instead, it’s a somewhat beguiling but rather lovely character piece inspired by journalist Tom Junod’s friendship with Mr Rogers and the resulting article, Can You Say… ‘Hero’?

There’s further good news in that you don’t need to know anything about Mr Rogers beforehand, thereby making this film more accessible than it initially appears. Everything you need to know is in the charming opening sequence, which frames the narrative in the form of Mr Rogers’ show. He sings a song, puts on some shoes and a cardigan and welcomes his neighbours (i.e. viewers) to this episode. However, Mr Rogers tells the audience about his friend Lloyd who is unhappy. As the camera roves about this child’s play environment, the story transitions to the real-life problems of Lloyd, a man so burnt out by cynicism that he comes with a seemingly permanent gloomy disposition. A recent father himself, Lloyd has to contend with the re-appearance of his own father Jerry – who abandoned his dying wife and thereby Lloyd for another woman.

The potential clash of these two very different personalities sounds like a very sentimental, saccharine-loaded Disney movie just waiting to happen. However, director Marielle Heller, fresh off the success of her Oscar-nominated true-life story Can You Ever Forgive Me?, is more interested in re-framing the personality of Fred Rogers through the eyes of a broken man whose pieces have been picked up and then given some glue to put them back together again by Fred himself. There is sentimentality here but it’s done in a subtle, sophisticated way that is more like a gentle tug at the heartstrings rather than a sharp yank. As Lloyd and Fred meet again and again, there’s a growing sense of admiration and respect for each other. Lloyd begins to understand what Fred is trying to do here – teaching children to think positively about feelings. Fred likes people, but especially people like Lloyd who are so blind to the world around them that they don’t stop to admire its beauty.

There’s a perceptive scene in the film when Lloyd asks Fred about how he switches his persona from being Mr Rogers the TV presenter to just being Fred. There’s the slightest flicker of bemusement and confusion on Tom Hanks’ face as the audience realises that the two are one and the same, something which Lloyd hasn’t grasped at this point in the story. Heller doesn’t portray Fred as a saint, suggesting that he has his human flaws too. The performances here are especially good, with Rhys doing a convincing job as a broken man who didn’t know that he needed help. Casting the nicest man in Hollywood as the nicest man in American television might seem obvious, but Hanks delivers a carefully-judged performance. His gentle line delivery and slow manner of speech weighing out each word for maximum impact. A Beautiful Day In The Neighbourhood is a beautiful film indeed. It’s a deceptively simple but highly engaging portrait of an unlikely friendship.