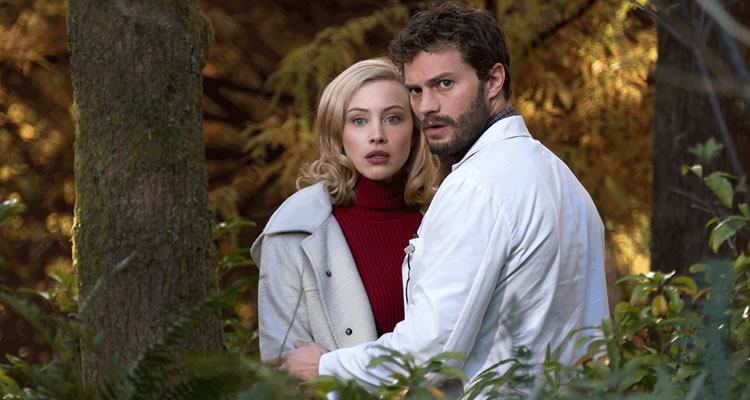 The 9th Life of Louis Drax

THE 9TH LIFE OF LOUIS DRAX (UK | Canada | USA/15A/108mins)
Directed by Alexandre Aja. Starring Jamie Dornan, Aiden Longworth, Sarah Gadon, Aaron Paul, Molly Parker
THE PLOT: Louis Drax (Aiden Longworth) is accident-prone. He believes his first accident was being born via caesarean section, but when an accident on his ninth birthday leaves him in a coma and his father missing, Dr Allan Pascal (Jamie Dornan) decides to try a new way of communicating with the boy, to find out just what caused his accident and how much he knows.
THE VERDICT: ‘The 9th Life of Louis Drax’ is based on the novel of the same name by Liz Jensen, and is a strangely muddled film. The tone and pace of the film are never quite right, so while there is a lot to admire, ‘The 9th Life of Louis Drax’ never seems to land properly.
Aiden Longworth leads the cast as young Louis Drax, and is as charming, deceitful, angry and fun as a nine-year-old boy should be. His voiceover brings the film together, and it is clear that he is a young actor to keep an eye out for. Sarah Gadon plays Louis’ mother Natalie, and makes the character quiet but with a darkness lingering just underneath the surface. Aaron Paul plays Louis’ father Peter, and has a strong rapport with his young co-star in this smaller role, Jamie Dornan breaks out the charm and curiosity as a young doctor who believes that there is more going on with Louis than meets the eye.
Max Minghella’s screenplay for ‘The 9th Life of Louis Drax’ is a tonal mess. The introduction to the film leads the audience to believe that the film will be a charming, whimsical romp along the lines of ‘Amelie’ or ‘Hugo’, but there is a darkness to the film that is only hinted at for most of the 108 minute running time, before coming to the fore too late for it to save the meandering film that is not quite mysterious enough.
As director, Alexandre Aja gets strong performances from the cast, but never truly manages to settle on a tone for the film – whimsy and reality continually clash, and never sit well together in ‘The 9th Life of Louis Drax’. As well as this, the idea that there is a mystery to be solved is evident from the beginning, but there is so much misdirection in the film it is hard to know which mystery the audience should care about. The pacing of the film is also a mess, with most of the film meandering in and out of dreams, and through the life of Louis through flashback, so when the finale finally does hit, it seems to come from nowhere.
In all, ‘The 9th Life of Louis Drax’ is never sure what it is going for. The whimsical, childlike side of the story never sits well with the dramatic, real world tale, and although there is plenty to like in the film this mish-mash never gels, and the finale feels rushed and rather out of place.
RATING: 2.5/5
Review by Brogen Hayes