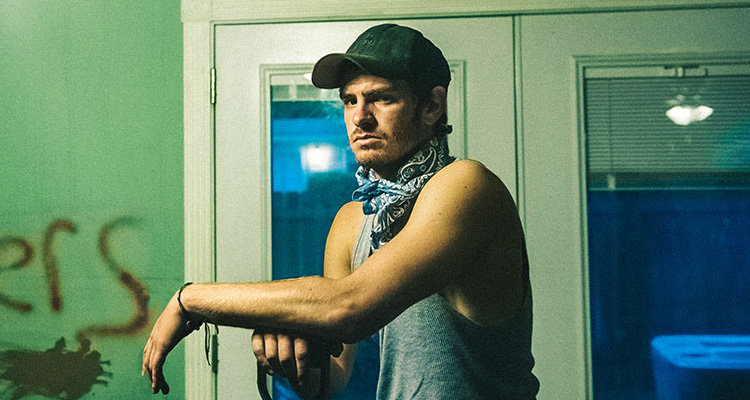 99 HOMES is the new movie starring starring Andrew Garfield and Michael Shannon. It opens today in selected Irish cinemas.
The below interview goes behind the scenes with director Ramin Bahrami.

Was Florida always going to be the location for 99 Homes?

What amazed me about the financial crisis was how loans for houses in just four states could turn the whole world upside down. And Florida was the one that sitting in New York I kept reading about. And it seemed so strange that no-one was looking into this on film, what the statistics meant to people’s lives. So I went down there to find out, and very quickly realised that yes, I wanted my film to take place there, and also that it would be a thriller involving a Faustian deal with the devil. Because seeing the real estate brokers all carrying guns, and feeling the threat of violence, I saw how the corruption in the banks and the government had worked its way into everyday life. In Florida, there were scams everywhere.

The cheap motel where Andrew’s character ends up with his family feels horribly authentic – was it somewhere you spent time yourself?

I spent time in a few of those hotels. They’re on Highway 142 in Orlando, which is the highway that leads to Disneyworld, and at certain times the Cinderella Castle literally casts a shadow over them. And there are gangbangers, prostitutes, and then you have middle-class families, Mom and Dad and three or four kids, all living in one room. And there are so many now the school buses have to go on diversion to the motels to pick up the kids.

What was your thinking behind casting Andrew Garfield and Michael Shannon?

I saw Andrew doing Death of a Salesman on Broadway, and I sensed he was becoming something special. And on screen this is really his first role as a man, not a teenager. Michael for me is one of the top five actors in the world – but again he’s never done this before. He’s never been seductive! We met in 2009 at the Venice Film Festival – he was there with [Werner Herzog’s] My Son My Son What Have Ye Done, and I grabbed him in the hotel and said ‘We have to work together. You’re basically my favourite actor working today.’ He was taking his two daughters who he dotes on to the beach, he had a tan and looked movie star handsome, and I thought ‘Why is he never handsome in a movie? Why doesn’t he get to talk?’”

You wrote the script with Michael in mind?

Absolutely. But he would improvise too. In fact, the very last line of the film is his. I didn’t know what it was going to be, and he always said ‘We’ll figure it out on the day.’”

There’s a terrible dark charm to his performance…

And he makes his arguments with that charm. But also, Michael’s character is in pain. Real estate brokers didn’t get into the job to put people out of their homes. But after the crash that became their job, and if they weren’t prepared to do it, they would lose it, and everything that goes with it. You see that circularity a lot. When Andrew was down in Florida doing his own research, he met a guy in the parking lot at Home Depot who told him a story that echoed our film. He used to do construction, then he lost his job, couldn’t feed his kids, and had to take a job evicting people. One day he knocked on a door and it was his best friend. He did the eviction, because he had to, but not long after he quit. Then later he saw the friend, and the friend said: ‘It’s ok, I forgive you. Because now I’m doing evictions too.’”

What was the dynamic like between Andrew and Michael on set?

The core of the film is this twisted father-son relationship, but what was fascinating was seeing something powerful happen between the actors. Because they were butting heads. They’ve got

very different styles – Andrew is much looser, from take to take he’s changing things, searching, but Michael is like a bulldog, he goes directly into what he wants to do. And they respect each other like deep down the characters do too, but they’re also butting heads, so you get those styles clashing. That was exciting.

What lay behind the decision to work with non-professional actors?

My first three films were made with non-professional actors, so it’s something I like and I’m used to. In 99 Homes, when Andrew is knocking on doors in the movie, at least half the people who answer them are real people, who I met location scouting and wanted involved. And I didn’t tell Andrew who was an actor and who wasn’t. So hopefully you have this alchemy between the experience of Michael, Andrew, and Laura, and the experience of real people. Our sheriff is a real sheriff who really does evictions, the cleanup crew in the film is one actor and everyone else is a real crew who go and take people’s stuff out of homes and leave it on the kerb.

Did making the film change how you saw real estate?

Well, Michael’s character sees homes as boxes, just things to make money from. I get that. Logically, it makes sense. But most of us look at homes as something more. When I go back to North Carolina to see my parents in the home I grew up in, I’m surrounded by memories, and it makes me think about who I am, where I’ve been, where I’m going. And that also makes sense to me, and I think we would miss that hugely if it disappeared.

What do want the audience to take away from the film?

This isn’t an agenda film – if it was I’d lead the stampede out of the cinema. For me the film is a ride, it’s a moral tightrope, and it’s about the push and pull between Andrew and Michael’s characters, and how frighteningly seductive Michael’s arguments are. But this is an interesting moment globally. The housing crisis as we show it in the movie is an American situation, but the 1%, that’s global. And in the UK and all over the world you’re seeing extreme right wing parties prospering. Why? Because people can’t afford to pay the rent, so they look for people to lean on. And as a filmmaker, my opinion on that is just that I hope we can start to talk about it.