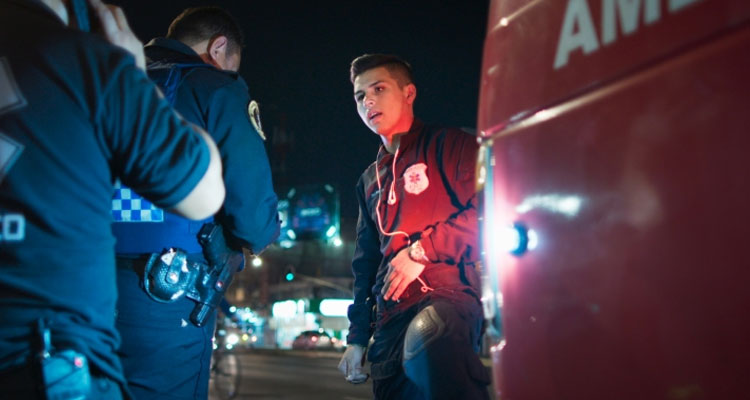 The Plot: Mexico City’s healthcare system is in crisis. With just 45 ambulances to cover a teeming population of 9 million people, a quick response cannot be guaranteed. To plug the deficiency in the system, private enterprises have set up on a for-profit basis, roaming the streets and responding to emergencies. One such enterprise is run by the Ochoa family. Night after night they go out on the streets, competing with both Government ambulances and other private enterprises. While the Ochoa family target wealthy districts they don’t always get paid by their clients, putting pressure on their own resources and finances…

The Verdict: In recent years, Mexico has become fertile ground for urgent documentaries about the state of the nation. Borderland was a powerful indictment against the country’s corrosive drug wars, which have destroyed both lives and communities. The insufficient healthcare system is next to be tackled in Midnight Family. It’s a literal fly-on-the-ambulance-wall documentary about how desperate times call for desperate measures. The Ochoa family ambulance is staffed by two men, a 17-year-old and his younger brother. They race around the city at night, responding to emergencies that range from a headbutted teenager to an unconscious baby and a young woman who fell four floors and is in a critical condition. That’s not all though. They also have to contend with competition and a corrupt police force that accepts bribes to allow them to operate.

Director Luke Lorentzen presents all this with only minimal context, shooting most of the film inside the tense Ochoa ambulance as they race through long nights and into the dawn. Nightcrawler’s mercurial Louis Bloom would no doubt approve. They tend to their patients, but then comes the request for money after – and it’s not always forthcoming. Some nights pass without any money coming in, putting pressure on them to cover the costs of running the ambulance or to even eat. At one point Juan, the teenage son, gives out about people not paying and says that his city would be lost without people like his family. How did it get to this though?

It’s a straight observational documentary with no sidebar interviews or examination of the wider political problems that have lead to this situation in Mexico City. Hence, the film is lacking a wider perspective that could explain why there’s such a shortage of ambulances and EMTs for a non-Mexican audience. It does get a tad repetitive too, even with different emergency scenarios each time. Some of them are distressing but Lorentzen moves his camera to one side and lets the audio fill in the blanks to chilling effect. What it lacks in perspective it makes up for in intensity, with a you-are-there realism as the Ochoas race through the streets and risk their lives for others. It’s a living for them, but a living as sparse as some of their patients. The Ochoas are as much victims of this unsatisfactory situation as everyone else. Midnight Family makes for mostly compelling view, with an urgency that speaks volumes.