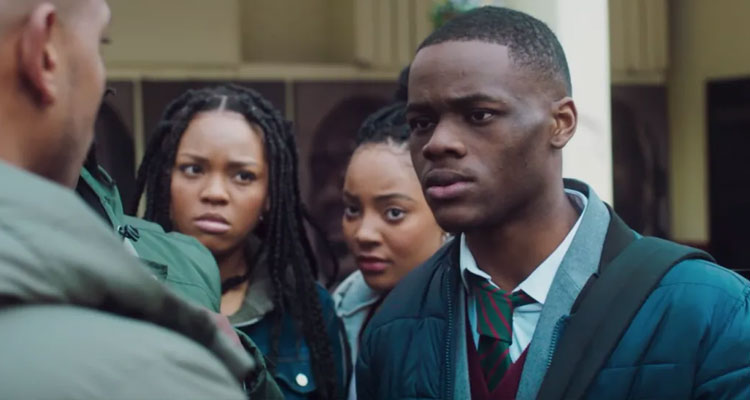 In short: Scrappy but promising

The Plot: Peckham, London. The city is gripped by a continuing wave of gangland crime, including knifings and shootings. Timmy (Stephen Odubola) is a bright teenager who has been best friends with Marco (Micheal Ward) for a long time. That friendship comes into sharp focus and becomes seriously tested when a shooting involving a relative splits their loyalties down the middle. As they come to terms with their actions and their roles in the ongoing gangland war, time passes and an eye for an eye becomes the stark reality…

The Verdict: London-born rapper Andrew Onwubolu AKA Rapman has established himself as a grime artist in the UK music scene. Having had a tough upbringing in Deptford, where he had to fight his way out of the school gates each day, he’s now turned those grim teenage experiences into a positive but cautionary tale about the corrosive influence of drugs and the devastating effects of gangland violence on young lives. It shows early potential for Onwubolu as a writer/director to watch, as he moves from the music scene into the film industry where there are still plenty of circling sharks to contend with.

Onwubolu centres the story around the friendship of Black British teenagers Timmy and Marco and how it changes dramatically over the course of the film. The change is gradual, but Onwubolu spends a good bit of time hanging out with the characters so that the disintegration is a shock to both the characters and audience. Both come from challenging family circumstances and becoming a gang member is the norm – if you can’t beat them, join them. Onwubolu himself shows up at infrequent points in the film to do a short rap about the unfolding events. It’s a bit disconcerting at first, but his hard-edged street poetry has a truthful ring to it. He becomes a commentator of sorts, with the film being more hopeful than grim.

For all the promising potential, it’s a scrappy film at times. Apart from the two leads and the talented Karla-Simone Spence, who plays Timmy’s tender love interest Leah, the acting is quite variable and shows inexperience on Onwubolu’s part in reigning in his other actors and their performances. Supporting characters flit in and out of the story and tend to merge with each other. The thick South-East London accent can be tricky to keep up with as well, at least for those not attuned to it. While Blue Story is an uneven film at times, Onwubolu has a strong message to deliver which he rams home with a scene suggesting the endless cycle of violence and how it sends young people to an early grave. Drawing inspiration from his own life gives the film an authentic impression, enough to make this ambitious debut worth a look.