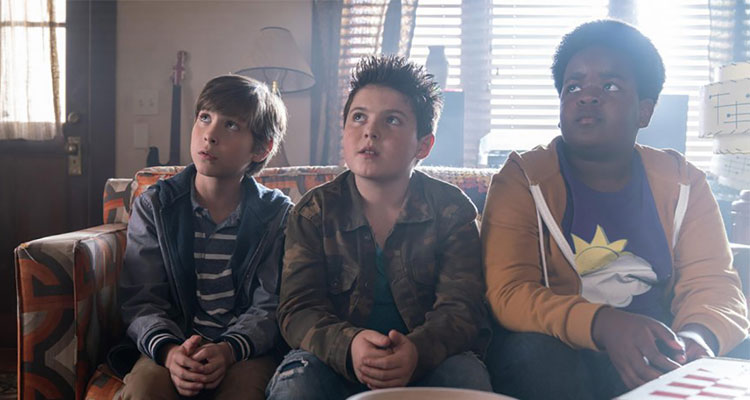 In short: A sugar rush

The Plot: Tweens and best buds Max (Jacob Tremblay), Lucas (Keith L. Williams) and Thor (Brady Noon) are in a bit of a fix. They’ve been invited to a basement kissing party… and haven’t a clue about how to kiss a girl. Through a series of mishaps involving Max’s father’s drone, they end up accidentally stealing a small amount of drugs from teenagers Molly (Molly Gordon) and Lily (Midori Francis). Pursued by the girls, they have to come up with a way to replace the drone and make it to the party on time, ready for their big moment as they make a tentative first step into the teenage years. It won’t be child’s play though…

The Verdict: As Role Models proved so successfully, there’s endless comedy value in kids swearing like troopers and trying to grow up too quickly. Sometimes the kids are even smarter than the adult characters. Good Boys mostly goes for the former, but adds in a kooky Stephen Merchant cameo as a dim-witted nerd thrown in for good measure. It’s no surprise to learn that Seth Rogen and Evan Goldberg are among the slightly perverse brains behind this adult-friendly but kid-fronted story. Who else would dare have tweenage kids playing with adult toys, tentatively drinking beer and getting into all manner of scrapes that would normally be associated with hormone-raging teenagers? Quick! Call Child Protective Services. Someone let this idea get out of control on set. Maybe not though…

It comes across as a tweenage Superbad, built around the friendship between the three lead characters. The script, by Lee Eisenberg and first-time director Gene Stupnitsky, rather smartly zeroes in on what makes these characters tick and takes the time to explore this. Max is pining for a girl that he’s desperate to impress. Lucas has an annoying habit of telling the truth all the time. Thor acts all tough, but he values their friendship more than his own self-interest. It’s that core story of childhood friendship that sparkles the most in this film. They don’t call themselves kids – they call themselves tweens. A lot of the humour comes from these tweens just having a few toes in adulthood rather than a foot. With typical childhood innocence, they misinterpret adult behaviour e.g. a nymphomaniac has sex on land and sea. They want to grow up fast, but don’t quite know how yet. They don’t have a roadmap, only a few pointers based on what they’ve observed / mis-interpreted. That’s comedy gold right there.

It’s a shame that tweenage children are actually barred from seeing Good Boys. Yes, there’s swearing, drugs references and inappropriate adult humour, but at its core is a rather sweet centre about the bonds of male friendship during a transitional phase in their lives. Maybe an airline version exists which might be palatable for them. The film is a bit too ridiculous to be taken seriously anyway. The thin plot is barely fleshed out and doesn’t bear scrutiny. It mostly involves a series of sticky situations that are incidental to the plot (e.g. crossing a busy freeway) but prompt much hilarity because of the age of the characters involved. Stupnitsky doesn’t push the humour too far though – he stops short of saying that he really means it. However, the good-natured humour and high hit rate on the laugh-o-meter are enough to ensure that Good Boys delivers a good time and sidesteps accusations of being irresponsible filmmaking. It’s a raucous and slightly outrageous comedy that knows what it is and just runs with it, like a kid in a candy store on a sugar rush.