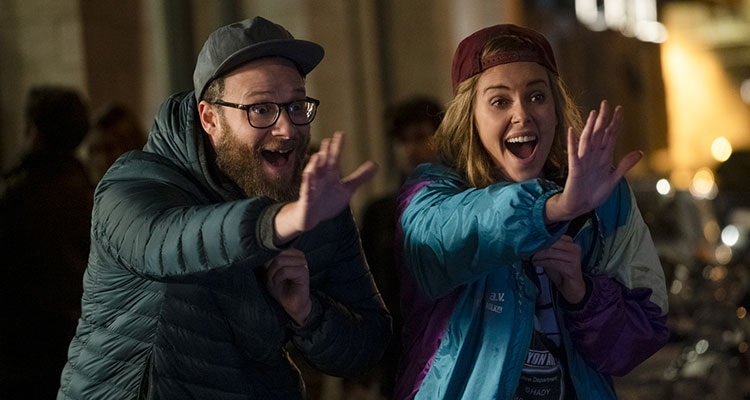 The Plot: The glamourous Charlotte (Charlize Theron) is the Secretary of State. She works for a President who is more interested in returning to screen acting than running the country. With him no longer seeking re-election, she has a long shot at becoming America’s first female President. At a party, she bumps into Fred (Seth Rogen). He’s a recently unemployed opinionated writer who is something of a dork. A likeable dork at that. More importantly though, she babysitted him when he was 13 and they shared a brief kiss. She hires him as a speech writer and they hang out together. The sparks fly as they get caught in ambushes and awkward situations, not helped by the flirtatious attention of the Canadian Prime Minister towards Charlotte (Alexander Skarsgard). Charlotte and Fred enjoy each other’s company, but how can they make this unlikely relationship work for everyone else?

The Verdict: Here’s a genuine delight. Long Shot looks like an unassuming sort-of romcom with a dash of action and a pinch of political shenanigans for good measure. The kind that Hollywood churns out on a regular basis, often willing us unconvincingly to go along with the ride and accept a mismatched couple. Except in this case, it works like a treat and goes down a storm with an audience who respond to the wittily-written script by Dan Sterling and Liz Hannah. The script would have us believe that the Secretary of State is a globe-hopping job with little time for a personal life. That’s where we find Charlotte early on, worn out but still ticking away and working on an environmental plan that could be a game-changer. When she re-connects with a childhood friend, her life becomes more interesting than the dry work of congressional bills and pressing the flesh to get international support for her plan.

Is the Secretary of State that action-packed and laid-back a job? Most likely not, but this is the movie world and some artistic licence is allowable (much like the TV President who became the actual President in this film, mirroring recent events in the Ukraine with uncanny timing). You won’t notice too much because Theron (who also produces) is in fine form here, being serious when she needs to be but also funny and charming. It’s a reminder that, you know, politicians are people too. When Rogen enters the room, the most unlikely power couple soon become a force to be reckoned with. This mismatched couple is only so in the eyes of everyone else, especially Charlotte’s disapproving adviser Maggie (the excellent June Diane Raphael, stealing many a scene). Thanks to sparkling chemistry between Theron and Rogen, their relationship in all its awkwardness becomes the driving force of the film.

There’s a Princess Fiona / Shrek-quality to their re-kindled courtship, but it becomes quite endearing as the duo are thrown into some hairy situations. The sometimes crude jokes are often at the expense of Rogen’s character Fred, but in a way that we’re laughing with him at the same time as laughing at him. They’re a dynamite combination, powering the film through to a satisfying and most amusing conclusion. Director Jonathan Levine moves on from the poor, deeply unfunny Snatched to the kind of comedy that made his name (think Warm Bodies and The Night Before, also with Rogen). He shows a deft touch in the way he portrays his lead characters and a motley bunch of quirky supporting characters too. Sure, the film is a bit too long in the tooth to sustain itself for just over 2 hours and it can stretch credibility. But when the actors are having this much fun together, it become infectious and it’s hard not to leave with a big grin on your face. A winning formula all round.