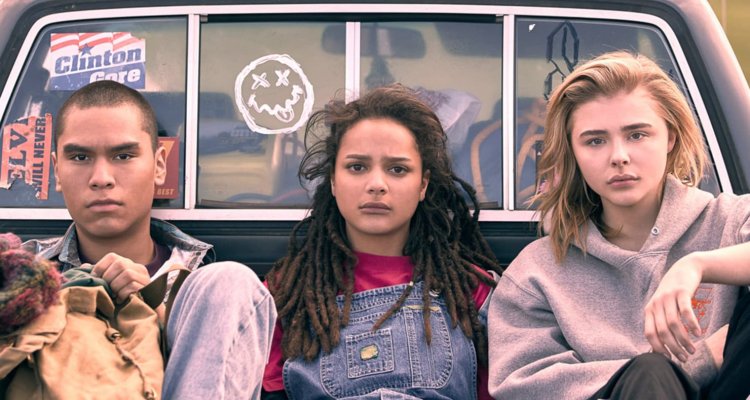 THE MISEDUCATION OF CAMERON POST (USA / 16 / 91 mins)
Directed by Desiree Akhavan. Starring Chloe Grace Moretz, Jennifer Ehle, John Gallagher Jr., Sasha Lane, Forrest Goodluck.
THE PLOT: Rural Pennsylvania, 1993. Teenager Cameron (Chloe Grace Moretz) is on the cusp of adulthood. Her parents died long ago, so she is cared for by a devout guardian. Cameron has a boyfriend, but she secretly prefers girls. When she’s caught making out with a girl, she’s sent to God’s Promise. It’s a gay conversion therapy centre run by Dr. Lydia (Jennifer Ehle) and Reverend Rick (John Gallagher Jr), himself a successful conversion and now living a straight life. As part of her re-programming, Cameron will have to face questions about her level of faith and her gender confusion, in order to get better. But what happens if ‘getting better’ destroys part of her identity in the process?
THE VERDICT: Based on the book by Emily M. Danforth, ‘The Miseducation Of Cameron Post’ quite rightly scooped the Grand Jury prize at this year’s Sundance Film Festival. It’s very much in tone with the Festival’s breeding ground for new, alternative voices in independent American cinema. Apart from that though, it’s a fine, sensitively-made film that doesn’t paint anyone as a villain or anyone as a hero either. It’s more a portrait of two forces that come up against each other, that of devout faith and that of burgeoning homosexuality. They’re not mutually exclusive though, as we come to discover over the course of this intriguing premise.
Given that gay conversion therapy centres are still, sadly, a fact of life in the more Bible Belt parts of America, there was potential here for a fire-and-brimstone delivery, re-programming and expelling the same-sex attraction out of Cameron. However, second-time director Desiree Akhavan keeps it low-key, to the point that you feel sorry for all the characters here – even Dr. Lydia’s Disney villain, as one character describes her at one point. The camp counsellors want to show these young people the way towards faith, conformity and a supposedly conventional life. The point is though that they can find their own way in time, whichever way they swing. It’s telling that in a rare moment of weakness, Reverend Rick is unable to answer a probing question from Cameron. Akhavan’s direction gently rams home the point.
Then there’s Cameron herself, brilliantly essayed by Moretz. It’s her most accomplished performance yet, conveying that whirlwind of teenage confusion about identity and finding one’s place in the world. Having grown up mostly without her parents, Cameron is a more well-adjusted young woman than the camp counsellors give her credit for. Moretz layers her performance with confidence, guided on by Akhavan’s perceptive screenplay. It’s not just Cameron’s story though. There are other teenagers in this camp, with their own stories of conservative parents. They are a little thinly sketched at times, but it’s a minor fault.
Known in some territories under the less wieldy (and perhaps more appropriate) title of ‘Come As You Are’, ‘The Miseducation Of Cameron Post’ is a thought-provoking film. It raises questions not about converting young people into something different, but about changing a person’s individual identity. If you change someone, do you destroy part of their identity along with it? Akhavan seems to be delivering a subtle message that when you’re a teenager, you should be questioning everything and accepting nothing – until you arrive at a place and a peace of mind that works for that person. Conformity sucks. Amen to that.
RATING: 4 / 5
Review by Gareth O’Connor