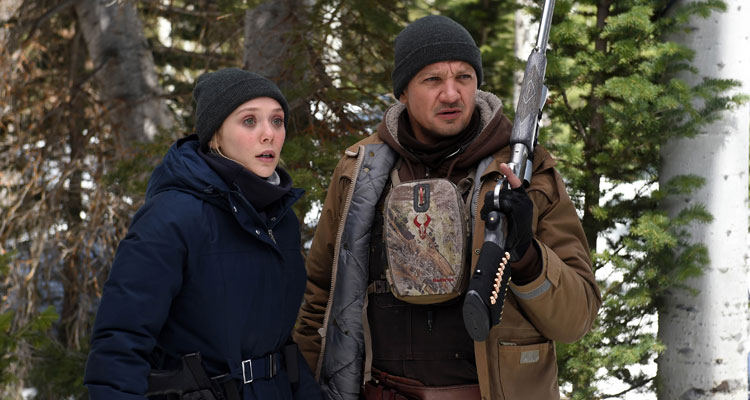 WIND RIVER (UK / Canada / USA/16/107 mins)
Directed by Taylor Sheridan. Starring Jeremy Renner, Elizabeth Olsen, Graham Greene, Gil Birmingham, Jon Bernthal.
THE PLOT: On the snowy Wind River Indian Reservation, a scared young woman runs out into the snow barefoot and alone. The next day, hunter and wildlife expert Cory (Jeremy Renner) discovers her dead body in the snow. As per procedures, tribal police chief Ben (Graham Greene) hands over jurisdiction to Las Vegas FBI Agent Jane (Elizabeth Olsen). It appears that the victim suffered an attack, with homicide suspected. However, the local coroner believes she died of natural causes due to exposure to the extreme cold. Jane enlists Cory’s help, as he knows the reservation like the back of his hand and also knew the victim. Finding the killer proves to be more difficult than imagined, as they get caught up in jurisdictional matters and the don’t ask-don’t tell policy that exists in this neck of the woods…
THE VERDICT: Having written ‘Sicario’ and ‘Hell Or High Water’, Taylor Sheridan’s completes his separately connected frontier trilogy with ‘Wind River’. This time around, he’s directing too. No wonder he scooped the Best Director award at Cannes earlier this year. ‘Wind River’ is a rock solid genre piece, a police procedural with an authentic, knowing sense of its own time and place. Inspired by true events, it recalls the likes of Peter Weir’s Witness as the audience surrogate (Jane) is plunged into a culturally different environment where the people can be as cold and harsh as the unforgiving weather.
It would be easy to pigeonhole the film as a straight thriller, but it’s a lot more than just that. If anything, Sheridan is less interested in who the killer is and more interested in playing out the character dynamics. As tensions rise and Cory uses his hunter instincts to sniff out clues, the pieces gradually fall into place. There’s one hell of a stand-off in the third act that would no doubt impress Quentin Tarantino. Amid the shoot-outs, Sheridan finds time to explore Cory and his partnership with Jane, as well as his friendship with the victim’s father Martin (Gil Bermingham). The pacing of the film is just right here – enriching the characters while moving the plot along at a smooth pace.
While surrounded by great performances all round, this is very much Renner’s film. It’s his best performance yet, soulful and determined, as his character is haunted by the loss of someone close to him. Renner gets to show a lot of range here, much more so than in the Marvel movies in which he co-stars with Olsen. Cory has a firm sense of justice too, so by the end you nod in agreement with his practical approach to it. Sheridan’s direction doesn’t falter here, signing-off with a great closing scene. That’s followed by a sobering thought which raises some questions about what really goes on in these Indian Reservations. ‘Wind River’ is easily one of the year’s best films and comes highly recommended.
RATING: 4.5 / 5
Review by Gareth O’Connor