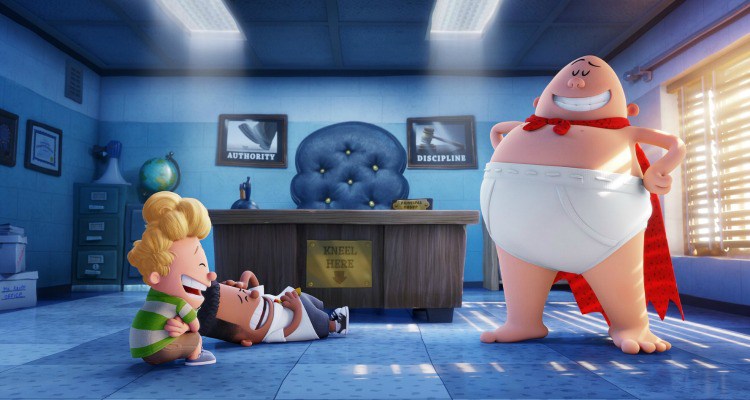 CAPTAIN UNDERPANTS: THE FIRST EPIC MOVIE (USA/G/89mins)
Directed by David Soren. Starring Ed Helms, Thomas Middleditch, Nick Kroll, Kristen Schaal, Kevin Hart.
THE PLOT: After their school Principal Mr Krupp (Ed Helms) threatens to put them in seperate classrooms, best friends George (Kevin Hart) and Harold (Thomas Middleditch) must find a way to stay together. When George discovers a magic ring that Krupp once confiscated, he hypnotises their teacher into believing he is a character the duo created; Captain Underpants. When teacher Professor P (Nick Kroll) arrives at the school with the plan to remove all laughter from the children, George, Harold and their newly created hero must find a way to stop him.
THE VERDICT: Based on Dav Pilkey’s series of kids’ books, ‘Captain Underpants: The First Epic Movie’ is a story of friendship and overcoming the odds, all while taking down evil and saving the day. Although the film is obviously aimed at the smaller members of the audience, there is a charm to the Captain Underpants film, fart jokes and all.
The cast of the film features Ed Helms, Kevin Hart, Thomas Middleditch, Jordan Peele, Kristen Schaal and David Soren, who all do a great job with voicing their characters, creating a balance between over the top humour, heart and warmth, which makes ‘Captain Underpants: The First Epic Movie’ work on more than just a superficial level.
Nicholas Stoller’s screenplay is based on Dav Pilkey’s books, and combines adventure, imagination and the dread of school with some references to movies that play to the adults in the audience, including Ferris Bueller’s Day Off and Joe Versus the Volcano. There is a nostalgia in the screenplay that will remind adults of the magic of Saturdays, with plenty of fart jokes, over the top pranks and silly names to keep the younger ones in the audience laughing.
David Soren takes on directing duties for the first time since ‘Turbo’ in 2013, and makes sure to keep the tone of ‘Captain Underpants: The First Epic Movie’ light and fun, with the only antagonist being people who dislike fun, and what it means to be a child. There are times when the dull kid in school seems to be problematic, but he is painted to be so ridiculous that it is probably unlikely that kids will find themselves bullied for being “Melvins”. The film is well paced and charming, and Soren makes sure that the voice work is grounded in emotional reality to keep the audience on board.
In all, ‘Captain Underpants: The First Epic Movie’ has some trouble with characterisations, but ends up being a charming film full of heart and laughs. There is something here for the little ones and the adults brought with them to the cinema, and there is an infectious silly energy to Captain Underpants: The First Epic Movie that is hard to ignore.
RATING: 3.5/5
Review by Brogen Hayes