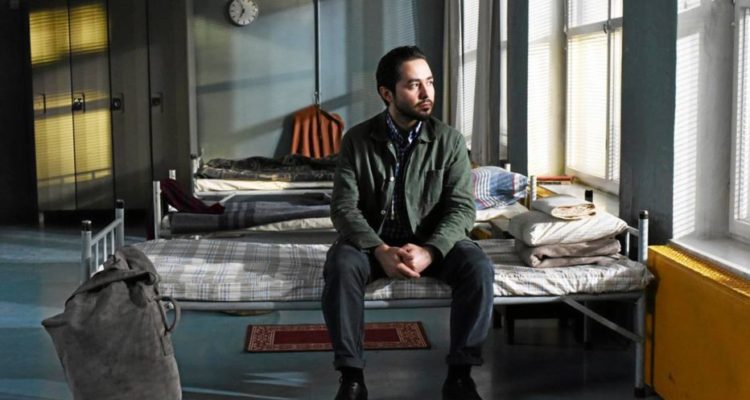 The Other Side of Hope

THE OTHER SIDE OF HOPE (Finland / Germany/12A/100 mins)
Directed by Aki Kaurismaki. Starring Sakari Kuosmanen, Sherwan Haji, Simon Al-Bazoon
THE PLOT: Wikstrom (Sakari Kuosmanen) seems to have it all. He’s a businessman who in one swift stroke decides to not only quit his job as a travelling salesman, but also his marriage. Instead, he wants to run a restaurant business. He takes over the running of The Golden Pint, a local restaurant that has seen better days. Even the staff seem stiff and bored. At the other end of the scale is Khaled (Sherwan Haji). Waking up in a coal pit, he’s a Syrian refugee who has just arrived in Finland seeking asylum. He’s looking for his sister, but until then he has to go through the immigration process along with the Iraqi refugee he befriends, Mazdak (Simon Al-Bazoon). In time, the paths of Wikstrom and Khaled will pass…
THE VERDICT: Finnish auteur Aki Kaurismaki’s latest dramedy is very much wrapped up in that distinct Finnish humour of his. He has a very dry, deadpan sensibility when it comes to his writing. Characters seem to inhabit a world where the boredom of daily routine is the norm, but he finds a way to inject warm humour and pathos into the most absurd of situations. There are certainly some absurd situations here, like the day that Wikstrom decides to be trendy. He turns The Golden Pint into Imperial Sushi, with comical results that have a Fawlty Towers touch to it. Basil would be proud. That one scene alone is worth the price of admission.
For the first two acts, Kaurismaki builds up two separate storylines. Khaled’s story is touchingly human, as he navigates his way around the Finnish immigration system. His own story is marred by tragedy, having lost most of his family to a missile in war-torn Aleppo. His journey across Europe is a familiar one, even facing persecution from local thugs who show their ignorance/indifference by mistaking him for a Jew. Khaled is a lost soul trying to fit in to his new home, which makes his eventual run-in (or rather punch-up) with Wikstrom a decisive moment for both men.
Kuosmanen and Haji do solid character work here, no doubt helped along by Kaurismaki’s intelligent and witty script. There’s a fine line between comedy and drama. If there’s too much of either, then the script will come out muddled. Kaurismaki is deft at keeping that balance though, moving towards a conclusion that is satisfying… but also leaves you wanting more. Kaurismaki must feel that many things in life can be laughed at – and he’d be right there. A sense of humour is essential in getting through any adversity. ‘The Other Side Of Hope’ is classic Kaurismaki – funny, poignant and accessible at a very human level. If you want an alternative to Captain Jack Sparrow this week, then seek out this little gem.
RATING: 4/5
Review by Gareth O’Connor