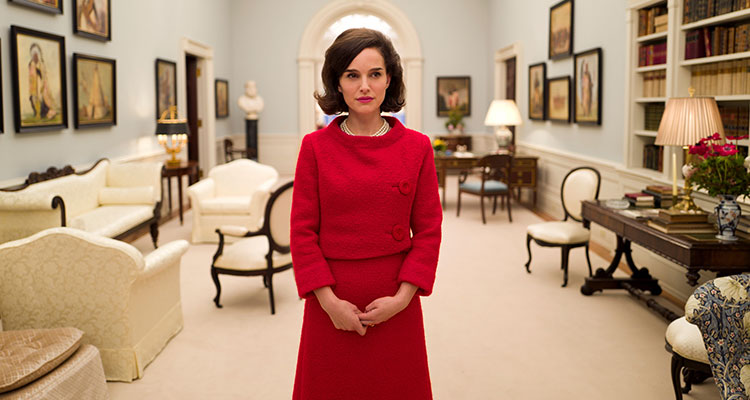 10 things you need to know about ‘Jackie’

Released in Irish cinemas this week, ‘Jackie’ tells the story of the immediate aftermath of the assassination of John F. Kennedy (Caspar Phillipson) in November 1963. Suddenly alone with two young children Jackie Kennedy (Natalie Portman) finds herself organising the assassinated President’s funeral while dealing with the almost immediate loss of her standing as First Lady of the US, and moving out of the home that she had lovingly restored and considering her husband’s – and her legacy – for generations to come.

To celebrate the release of ‘Jackie’, Movies.ie has gathered together 10 facts about the movie that you really ought to know.

1. Accent
Jackie Kennedy had a very distinctive accent, and Natalie Portman said that she found the accent a unique way of getting into the character, although she found it difficult to drop Kennedy’s manner of speaking after filming ended. In an interview with ET Online, Portman said; “I always think that I drop [the accent] right away but I definitely got some complaints from friends and family that I was still talking in Jackie voice”.

2. First incarnation
‘Jackie’ was first announced as a Darren Aronofsky project that was to star Rachel Weisz as Jackie Kennedy. Both ultimately withdrew from the project, but Aronofsky stayed on as producer.

3. Director
After Aronofsky left the project as director, Pablo Larraín took over directorial duties. Larraín previously directed ‘No’, starring Gael Garcia Bernal, and ‘Tony Manero’, which tells the story of a man who becomes obsessed with ‘Saturday Night Fever’. ‘Jackie’ is Larraín’s first film to be shot in the US.

4. Journalist
Billy Crudup’s character is never named in the film, and is billed as The Journalist in the credits. The character is actually inspired by Theodore H. White of Life Magazine, who in real life, conducted an interview with Jacqueline Kennedy.

5. Score
‘Jackie’ is the second film that composer Mica Levi has created the score for. Levi’s first was ‘Under the Skin’, which she won a European Film Award and was BAFTA nominated for.

6. First of two…
Greta Gerwig and Billy Crudup both star in ‘Jackie’, the first of two films that the pair appear in this year. The second is ‘20th Century Women’, which is released in Ireland next month.

7. Costumes
Natalie Portman used the costumes of ‘Jackie’ as another way to get to know her character. In an interview, Portman said “Jackie appreciated beauty so much and that was important to who she was, even if it was sometimes disregarded as an indulgence. I started to see her clothes very much as part of this entire facade that surrounded Jackie. It was a part of how she wanted to be seen, but it was also not all of who she was.”

8. Small screen to big screen
According to screenwriter Noah Oppenheim, ‘Jackie’ was originally envisioned as a HBO miniseries that would cover the “four days between John F. Kennedy’s assassination and his burial, showing Jackie at both her most vulnerable and her most graceful” with Steven Spielberg set to produce the series.

9. Apprehensiveness
Director Pablo Larraín was originally hesitant about directing a biopic when he was offered the opportunity to direct ‘Jackie’. Larraín eventually realised that he connected with Jackie Kennedy as a character, and was interested to direct a film from a woman’s perspective since his previous films had focused on male protagonists.