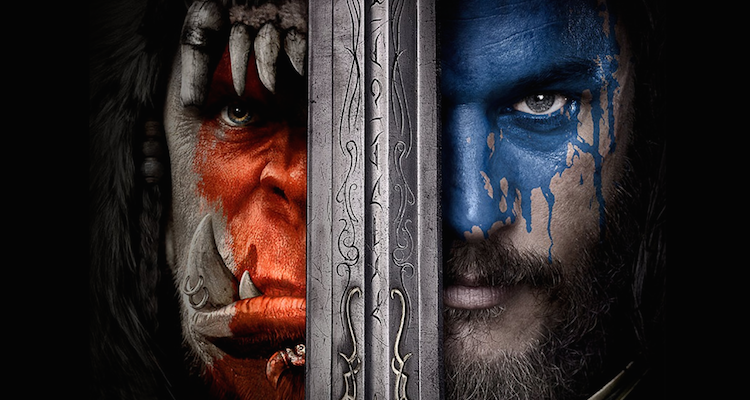 WARCRAFT: THE BEGINNING (USA/12A/123mins)
Directed by Duncan Jones. Starring Ruth Negga, Travis Fimmel, Paula Patton, Ben Foster, Dominic Cooper, Toby Kebbell
THE PLOT: Before Orcs and Humans were constantly at war, before their races had ever even met, Orc Cheiftain Durotan (Toby Kebbell) knew that the Orc world – Draenor – was dying. With the help of some incredibly dark magic, the Orcs find a new world to call their own. The trouble is that this world – Azeroth – is already inhabited by humans, and is a world the humans are not willing to give up on just yet.
THE VERDICT: Based on the wildly popular gaming franchise, ‘Warcraft: The Beginning’ walks onto screens already fully formed, but rather inaccessible to those of us who have not played the games. In trying to bring in too much of the source material, ‘Warcraft: The Beginning’ goes from loving homage to bloated mess.
The cast of ‘Warcraft: The Beginning’ are really fighting a losing battle from the moment they step on screen; most of them are criminally underused – step forward Ruth Negga – and the rest are playing characters that are underdeveloped and one dimensional, leaving the audience unclear as to just who they should be rooting for. The cast features Travis Fimmel, Paula Patton, Ben Foster, Dominic Cooper, Toby Kebbell and Daniel Wu.
Screenwriters Duncan Jones and Charles Leavitt obviously have huge respect for the Warcraft franchise and all that entails, but this is where the problems with the film begin to arise. Where most video game movies seem to wilfully ignore their source material, Warcraft seems to try to cram 20 years of gaming history into just two hours on screen, meaning there is simply too much going on on screen. Add to this some rather mystifying edits that leave the characters jumping through the story, pacing speeding up and slowing down and some attempts at comedy that do not always work, and Warcraft goes from loving homage to something else entirely.
As director, Duncan Jones seems to have bitten off more than he can chew with this CG heavy fantasy epic. The performances are fine for the most part – with some actors faring better than others – but it is hard for the audience to root for characters that we know little about, and since none of the characters in Warcraft are fully fleshed out, this is a real problem. As mentioned, the pacing of the film is an incredible mess, with Warcraft feeling as though it was cut down from over 4 or 5 hours long, with edits being made seemingly indiscriminately, with little regard for story. Add to this some terrible CGI and patchy attempts at comedy, and ‘Warcraft: The Beginning’ is simply an overly bloated, loud, ugly mess.
In all, ‘Warcraft: The Beginning’ is a film that struggles under the weight of too much source material, a screenplay that tells the audience little of the characters or the reasons for war, and an edit that makes the pacing of the film bloated, messy and overly long. Duncan Jones was not the most obvious man for the job, and now it is clear that ‘Warcraft: The Beginning’ is a film that simply swallowed up the good intentions of his director.
RATING: 1/5
Review by Brogen Hayes