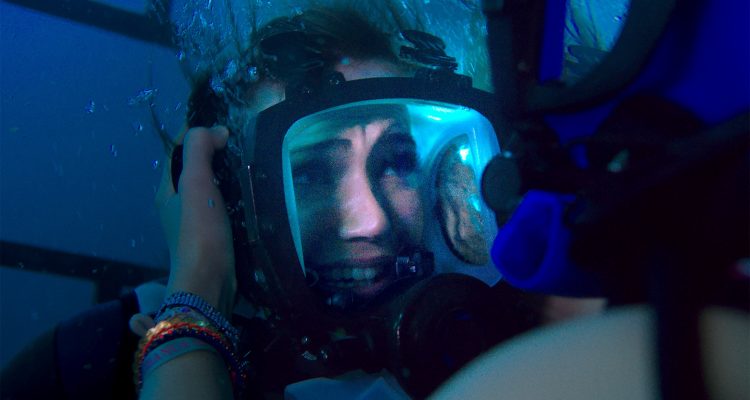 47 METRES DOWN (UK / USA / Dominican Republic/15A/89 mins)
Directed by Johannes Roberts. Starring Mandy Moore, Claire Holt, Chris Johnson, Matthew Modine.
THE PLOT: Nursing a broken heart, Lisa (Mandy Moore) takes a holiday with her sister Kate (Claire Holt) in Mexico. They flirt with local Javier (Chris Johnson), who convinces them to try something daring and completely different. The next morning, they get onboard on a boat captained by Taylor (Matthew Modine). The object of the dare is a rusty old anti-shark cage, which will lower them five metres down into the depths so that they can observe the underwater world… and get up close and personal with some 20-foot great white sharks. The winch slips and then snaps, plunging the sisters to the bottom 47 metres down. With air running out, sharks circling and a route to the surface fraught with danger, can they make it out alive?
THE VERDICT: ‘Cage goes in the water, you go in the water. Shark’s in the water’. Watching 47 Metres Down, it’s obvious that Lisa and Kate have either never seen Jaws… or have forgotten Quint’s doom-laden statement. However, that’s the basic premise of this economical underwater thriller from director / co-writer Johannes Roberts. He’s a workman-like director who delivered forgettable horrors Storage 24 and The Other Side Of The Door. 47 Metres Down is more in tune with its stripped-back premise and Roberts actually delivers the frights on more than a few occasions.
He wrings considerable tension from depleting oxygen levels, with nerve-wracking scenes involving masks being taken off and tanks being switched. He also creates a swirling sense of mystery about his underwater world, staying with the sisters and not returning to the surface for cutaways involving the boat crew. You’re with them every agonising minute as the clock ticks away, wondering how they’re going to get out of this potentially watery grave. It’s quite a mechanical film in that sense, with the plot creaking like its anti-shark cage as it tries to pose alternative rescue options. In fact, there’s an option presented early on which is ignored… and then played out later on. Though, that would result in a shorter film. The script isn’t entirely watertight.
Although it’s quite tense throughout, Roberts underuses his toothy menaces. That’s fine for ‘Jaws’, which was mostly on the water and the shark a latent threat. When characters are deep down, the sharks should come more into play and pose a more immediate menace. The performances are serviceable, given the limitations of the masks and the murky cinematography (thankfully not in 3D). Most of the acting is through the voices, with tomandandy’s score working well in unison. ’47 Metres Down’ almost didn’t make it into cinemas, but we can be moderately thankful that it did. It may not be the superior shark film that was last year’s ‘The Shallows’, but it’s still a fun ride to the bottom of the ocean.
RATING: 3/5
Review by Gareth O’Connor