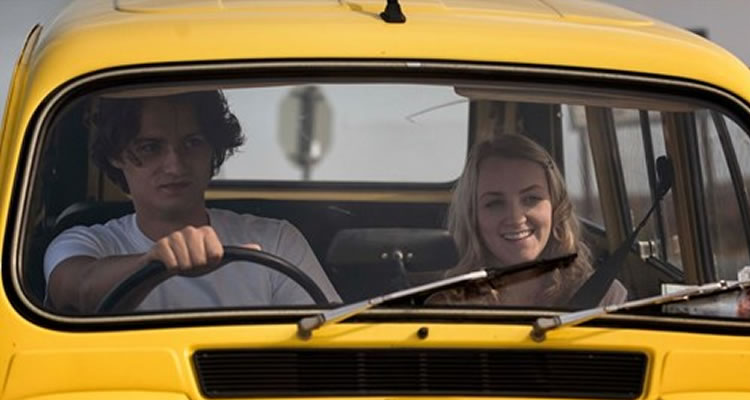 My Name is Emily

MY NAME IS EMILY (Ireland/12A/100mins)
Directed by Simon Fitzmaurice. Starring Evanna Lynch, Michael Smiley, Martin McCann, George Webster, Barry McGovern.
THE PLOT: Teenager Emily (Evanna Lynch) always had slightly off kilter parents – her father (Michael Smiley) read obsessively when she was born and did not speak for a year – but after tragedy strikes and Emily is sent to live with a foster family, she is determined to rescue her father from a psychiatric hospital and, with the help of a new friend Arden (George Webster), she sets out to do so.
THE VERDICT: The story behind ‘My Name is Emily’ is an intriguing one, and one that the audience finds hard to put aside when watching the film. Not only is this writer/director Simon Fitzmaurice’s first film, but it is also a film written and directed by a man surviving with late stage motor neuron disease.
Evanna Lynch finally returns to the big screen at this side of the Atlantic after her star making turn as Luna Lovegood in the ‘Harry Potter’ franchise – there have been some US cinematic outings, like ‘GBF’ and ‘Addiction: A 60s Love Story’ – and she takes the lead in My Name is Emily with ease. Shaking off the sometimes stilted feel of her performances in the Harry Potter films, Lynch makes Emily a rounded and believable character whose odd formative years have led to her being a fiercely independent and clever young woman. There are times where the character seems to change her mind on a whim, but Lynch almost always makes this work.
Michael Smiley plays Emily’s father Robert and, although he is a relatively small character, his influence is obvious in Emily, and Smiley makes the character warm and energetic. George Webster rounds out the central trio as Arden; a young man fascinated by Emily and who is brought along for the journey when she sets out on a road trip across Ireland.
Simon Fitzmaruice’s story starts off feeling like a teen Terrence Malick movie, filled with fleeting images, swirling pages and out of focus lights, as well as teen profundity from Emily, which is obviously influenced by her father. Once Emily and Arden hit the road however, the film turns into a road movie, showing off Ireland at its beautiful best, but slightly undermining the introspection of the first act. From here, the film gets back on track once truths are revealed to be only half true, and Emily struggles to reconcile the lies she has been told with the rest of her life.
As director, Fitzmaurice has a light touch, making ‘My Name Is Emily’ feel like a glossy, breathless adventure to reclaim the love of a parent, while developing new love at the same time. As well as this, the film is constructed in such a way that it feels as though the film is the imaginary one that Emily is the star of – the one in her own head – and it is this that gives the film a lot of its charm and warmth.
In all, ‘My Name is Emily’ is a little uneven in tone, but Evanna Lynch proves herself well able to carry a film, and the light and glossy touch given to a story with a dark undertone is charming and sweet.
RATING: 3.5/5
Review by Brogen Hayes