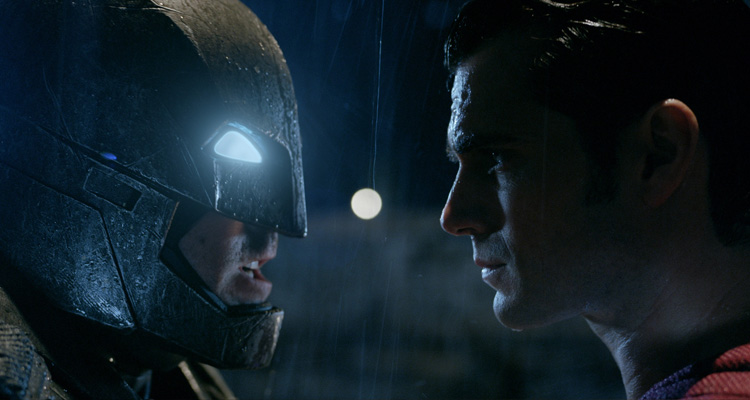 Batman Vs Superman: Dawn of Justice

BATMAN V SUPERMAN: DAWN OF JUSTICE (USA/12A/155mins)
Directed by Zack Snyder. Starring Ben Affleck, Henry Cavill, Amy Adams, Jesse Eisenberg, Diane Lane, Laurence Fishburne, Jeremy Irons, Holly Hunter, Gal Gadot, Kevin Costner.
THE PLOT: After a little backstory revealing just how Bruce Wayne became Batman and how Superman is a misunderstood man who fell to earth, we’re introduced to our baddy, Lex Luther (Eisenberg), your average wise-cracking, sweaty-palmed billionaire in sneakers. And, yep, Lex wants to rule the world, by, eh, pitting the world’s two big superheroes against one another. As ace reporter Clark Kent (Cavill) and his partner-in-investigative-journalism Lois Lane (Adams) set about unravelling the clues behind Lex’s evil plot, Wayne (Affleck) is trying to control his vigilante temper as his Batman starts torturing and branding his child-molesting, sex-slave-caging prey. And that’s all just in the first five minutes.
After that, there’s a whole smorgasbord of plot, involving an upright Kentucky congresswoman (Hunter, of course), a mysterious leggy, female Bond (Gadot), old people looking lost (Costner, Fishburne), an alien corpse (nice work, Michael Shannon) and lots of neck-tattooed terrorists in black SUVs. Oh, and a big mutant monster that might represent Donald Trump.
THE VERDICT: Who keeps throwing money at Zach Snyder? The man might just be Hollywood’s greatest franchise killer ever, having nosedived ‘Watchmen’, ‘Legend Of The Guardians: The Owls of Ga’Hoole’ (not even Troy McClure could beat that title), ‘Sucker Punch’ and ‘Man Of Steel’. And now Zack outdoes himself with a two-for-one, making sure both Batman and Superman will have to retreat for a few more years, to regroup and reboot, and be reimagined all over again. Actually, and without giving too much away, he’s pretty much nobbled the hopes and dreams of Wonder Woman too, which the boy is currently filming – for now – and his in-pre-production ‘Justice League’ outings.
There is so much wrong with this movie, it’s hard to know where to start.
To be fair, the cast line-up is a fair warning, being full of faded or failed would-be blockbuster giants, comeback cowboys and embarrassed character actors. Eisenberg’s naturally nervous disposition should work wonders for playing the desperate, nobody-loves-me Lex Luther, but, instead, Jesse seems to be simply channelling Crispin Glover. Badly.
Even the loved ones back home are weak, with Superman supposedly inspired to save the world by Amy Adams teetering uncomfortably in high-heels and Batman relying for his TLC from Jeremy Irons in hemp crocs.
There’s just no one to root here, or even like. There’s no J.K. Simmons. No Christopher Reeves. Heck there isn’t even a George Reeves here, ironically enough.
As for Snyder, once again he delivers a big, hot mess that’s 10% noir and 90% naff.
Ultimately, what you’re left with is far more ‘Mystery Men’ than ‘The Avengers’, the Golden Raspberry-baiting ‘Batman V Superman’ playing like a series of CGI-drenched trailer-chasing shots held together by the feather-flightiest of plots.
RATING: 2/5
Review by Paul Byrne