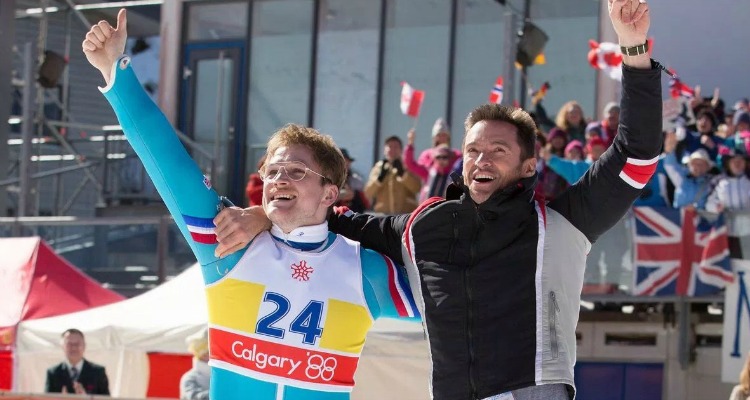 10 things you need to know about EDDIE THE EAGLE

‘Eddie the Eagle’ is released in Irish cinemas this week, and tells the story of Eddie Edwards (Taron Edgerton), an unlikely athlete who went on to become the UK’s most celebrated ski jumper at the 1988 Winter Olympics. A true underdog story, ‘Eddie the Eagle’ also stars Hugh Jackman, Keith Allen, Jim Broadbent and Christopher Walken, and Movies.ie have gathered together 10 facts about the film. Keep reading to find out more…

1. True Story
‘Eddie the Eagle’ is based on a true story; Eddie Edwards, at the time of the Olympic Games in 1988, was the best ski jumper in the UK, and qualified for the Olympics after switching from downhill skiing. Since retiring, Edwards has released a book and two songs in Finnish – even though he does not speak the language – and was the winner of the ITV celebrity diving show ‘Splash!’

2. Irish connection
Irish director Declan Lowney, whose recent work includes ‘Alan Partridge: Alpha Papa’, had been working on a big screen version of Eddie’s story since 2007. At different times Steve Coogan and Rupert Grint were in takes to play the title role, but the film ultimately did not go ahead.

3. Dramatic licence
In June 2015 Eddie Edwards told BBC News that he believes the movie will be 90% fiction. Edwards said, “I’ve been warned only 10-15% of it is based on my life”.

4. Soundtrack
Gary Barlow has created the soundtrack for the film, which also features Kim Wilde, Andy Bell and Go West.

5. Shooting
To capture the international look and feel of the film, shooting took place in Oberstdorf and Garmisch-Partenkirchen in Bavaria, in Seefeld in Tirol, and at Pinewood Studios.

7. Physique
Taron Egerton said he was in awe of co-star Hugh Jackman’s physique. He said, “Hugh Jackman has got guns to die for. Have you seen his arms? They are bigger than my head!” That’ll be the Wolverine workouts for you!

8. Stunts
In early 2015, before the film started shooting, Eddie Edwards revealed that he lent his old ski jumping gear to producers and offered to help with production because nobody jumps in the old “classic” style any more.

9. The Eddie ‘The Eagle’ Rule
Since Eddie Edwards became a worldwide phenomenon – for the wrong reasons – at the Olympics he competed in, the International Olympic Committee has instituted a rule that stops amateurs taking part in the Games.