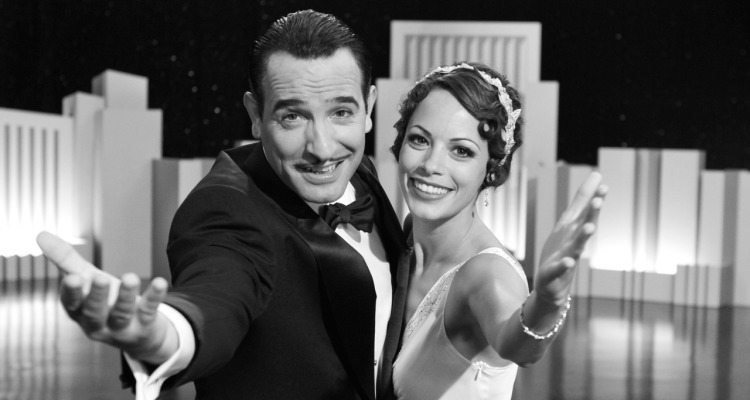 Films about Hollywood – From The Artist To Hail Caesar

‘Hail, Caesar!’ is released in Irish cinemas this week, and marks the Coen Brothers’ first return to comedy after the wonderful but distinctly dramatic ‘Inside Llewyn Davis’ in 2014. ‘Hail, Caesar!’ boasts a stellar cast including Scarlett Johansson, Tilda Swinton, George Clooney, Josh Brolin, Ralph Fiennes, Jonah Hill and Frances McDormand. The film is the story of a Hollywood fixer in the 1950s who finds himself struggling to meet the demands of the studio’s stars. With this in mind, Movies.ie has taken a look back over the best films about Hollywood and that notorious business called show…

THE ARTIST
Released in 2012, and the darling of the Cannes Film Festival the year before, ‘The Artist’ is the story of a Hollywood star struggling to make the transition from silent to talking pictures. A similar story was explored through the medium of song in the Gene Kelly musical ‘Singin’ in the Rain’, but the wonderful thing is… ‘The Artist’ is not the product of the Hollywood studio system; it’s a French film. Of course, since the rise to stardom of leading man Jean Dujardin, we already know this!
“The Artist’ is still a wonderful piece of work however, and as well as telling the story of people struggling with new technology, it is also the story of someone terrified to fail, and is timeless in its message and Old Hollywood feel.

SUNSET BOULEVARD
If ‘The Artist’ is about someone trying to keep up with change, then ‘Sunset Boulevard’ is the opposite; the story of a faded star who desperately believes that a glorious comeback is just around the corner. Billy Wilder’s film is another one about a silent film star struggling with changes in the industry, but unlike Jean Dujardin’s George Valentin, Norma Desmond (Gloria Swanson) is not trying to keep up, but waiting for Hollywood to remember her. Of course, it all ends in tragedy, making the film an examination of life after fame, and the desperate measures people will take to stay in the limelight.

WHO FRAMED ROGER RABBIT
In 1940s Hollywood, cartoon characters and humans inhabit Hollywood together, although the cartoons do have their own version of Tinseltown in Toon Town. When cartoon actor Roger Rabbit is framed for the murder of Marvin Acme, Private Eye Eddie Valiant (Bob Hoskins) finds himself helping Roger to prove his innocence. Meanwhile, Judge Doom (Christopher Lloyd) is on a mission to destroy Toon Town, and everyone in it. ‘Who Framed Roger Rabbit’ is an homage to the gumshoe movies of the 1930s and 1940s, with a touch of intrigue and adventure thrown in. Hollywood is both hero and villain in ‘Who Framed Roger Rabbit’, but the film celebrates those that are different in Tinseltown – thee ‘Toons’ – and is a whole lot of fun to boot.

SWIMMING WITH SHARKS
If you thought that ‘Horrible Bosses’ was the first time that Kevin Spacey played a… well… Horrible boss, then think again. In this 1994 George Huang movie, Spacey plays Buddy Ackerman, an influential movie mogul who hires young writer Guy (Frank Whaley) as his assistant. This incredibly dark comedy sees Guy bullied, verbally abused and generally broken down by his Hollywood producer boss, until he snaps and finally kidnaps Buddy. Of course, things don’t go according to plan, but Guy has to do what he can to move through the industry… Right?
‘Swimming with Sharks’ is an incredibly dark comedy about the seedy underbelly of shiny Hollywood, and Kevin Spacey’s performance as the merciless Buddy makes the film hilarious and probably more true than we would like to think.

BARTON FINK
‘Hail, Caesar!’ is not the first time The Coen Brothers have made a film about Hollywood; in 1991, the Coens told the tale of a young playwright named Barton Fink (John Turturro) who, after the success of his first Broadway play, is hired to write scripts in Hollywood. The trouble is that every little noise disturbs Fink, as he has a terrible case of writer’s block, and his next door neighbour may not be all that he seems.
‘Barton’ fink is an over the top tale of writing and murder in Hollywood of the 1940s, but also pokes fun at the contract system in filmmaking, as Fink is kept on the payroll of the studio in order to be ridiculed, since the studio boss hated the film he finally produced.

Honourable Mentions to… ‘A Star is Born’. ‘The Player’ and ‘Adaptation’

‘Hail, Caesar!’ is released in Irish cinemas on March 4th 2016. Watch the trailer below…