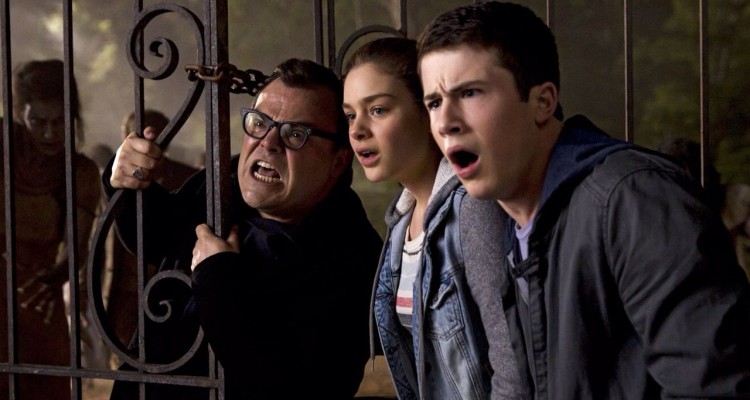 10 things you need to know about Goosebumps

‘Goosebumps’ is released in Irish cinemas this week, and stars Jack Black as the mysterious Mr Shivers. When Zach (Dylan Minette) and his mother move in next door to Mr Shivers and his teenage daughter Hannah (Odeya Rush), it is not long before Zach discovers the secret that Mr Shivers is trying to keep; he is actually the author R.L. Stine and, when the original manuscripts for his famous books are opened, the monsters inside are set free into the world. It is up to Zach, Hannah and Stine to save the day, and put the fictional monsters back between the pages of the books again.
Movies.ie has gathered together 1o facts about ‘Goosebumps’; keep reading to find out more…

1. Goosebumps?
The film is inspired by the hugely popular series of children’s horror fiction novellas by R.L. Stine. The books are published under the umbrella title of Goosebumps and to date, there are over 180 books in the series. Phew!

3. Not only, but also
As well as being a series of novellas, Goosebumps was also made into a TV show, which ran for four seasons between 1995-1998. The show was a Canadian/American production, and took the form of an anthology programme, with a different story and cast in each episode.

4. False start
There was an attempt to make a ‘Goosebumps’ movie in the 1990s. Tim Burton was attached to the project in 1998, but it ultimately fell through partly a script or a story to adapt could not be agreed upon.

5. Try again
During the 1990s, the Godfather of the Dead; satirical horror filmmaker George A. Romero was hired to adapt the book series into a single film and even finished a draft.

6. Story
In this version of ‘Goosebumps’, instead of the film being an anthology style or based on one particular story, screenwriter Darren Lemke has made the film about the author of the series, R.L. Stine, and created a universe where all of Stine’s monsters could exist together.

7. Fact and Fiction
Although the fictional version of R.L. Stine, played by Jack Black in this film, has a daughter named Hannah, in real life R.L. Stine actually has a son whose name is Matthew.

8. Cameo
R.L. Stine himself makes a cameo in ‘Goosebumps’, playing a drama teacher named Mr Black. This could well be a nod to Jack Black’s career as an actor, since it appears that Stine is playing a fictional version of the actor.

9. Monster Mash
Although R.L. Stine has created hundreds of monster for his books, not all of them make an appearance in this film; the main ones shown are from the books “Night of the Living Dummy”, “The Abominable Snowman of Pasadena” and “Revenge of the Lawn Gnomes”.

10. When can I see ‘Goosebumps’?
‘Goosebumps’ is released in Irish cinemas on February 5th 2016. Watch the trailer below…