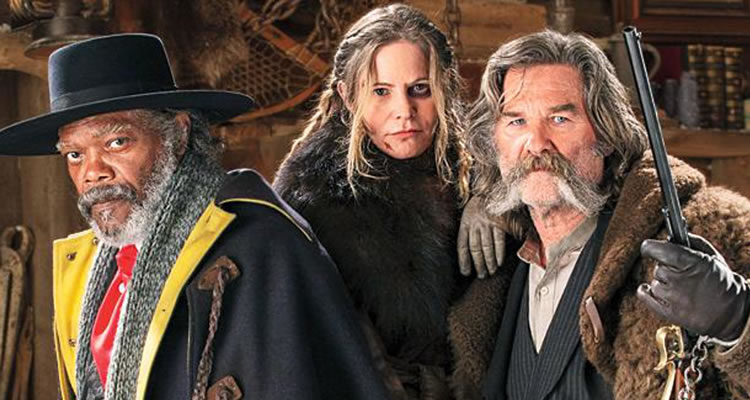 THE HATEFUL EIGHT (USA/18/167mins)
Directed by Quentin Tarantino. Starring Kurt Russell, Samuel L. Jackson, Jennifer Jason Leigh, Bruce Dern, Walter Goggins, Demián Bichir, James Parks, Dana Gourrier, Zoe Bell, Michael Madsen, Tim Roth.
THE PLOT: In the middle of a bitterly cold Wyoming winter, and with a blizzard on the way, two bounty hunters and a wanted woman take shelter in a cabin in the mountains. When they get there, however, they find the place already filled with travellers hiding out and, although the bounty hunters have a shaky alliance, this is about to be tested in a room full of opinionated, dangerous and reprehensible people.
THE VERDICT: The eighth film by Quentin Tarantino – seemingly he counts the two ‘Kill Bill’ films as one – has been dogged with trouble since before shooting even began. An early version of the script was leaked in January 2014 causing Tarantino to temporarily drop the project before a live reading of the script convinced him to go ahead. Now that the film’s release date approaches, The Guardian reports that three UK cinema chains – Picturehouses, Cineworld and Curzon – will not be showing the film. Sigh. All of this before we even get to the film.
‘The Hateful Eight’ is populated with wonderful actors; some of whom have worked with Tarantino before – Samuel L. Jackson, Walton Goggins, Tim Roth, Kurt Russell, James Parks, Zoe Bell, Michael Madsen – and others who have not, including Demián Bichir and Channing Tatum. Most are given the chance to act the crap out of the movie and seem to have a whale of a time doing it, notably Tatum, Jackson and Goggins – but others have less of a chance, being reduced to nothing more than vessels for dialogue. Oh and Tim Roth sadly seems to be doing an impersonation of Christoph Waltz in ‘Inglourious Basterds’.
The screenplay for ‘The Hateful Eight’ is laden down under what must be hundreds and hundreds of pages of dialogue. This starts the film off well, with exposition being handled carefully and plenty of backstory to the main characters being given. By the second and third time we hear the same stories however, The Hateful Eight becomes repetitive, puerile and rather boring. Add to this the fact that it is difficult to root for any of the main characters – I know, I know; ‘hateful’ – and the audience begins wondering why we are watching this film at all. By the time the final shootout eventually happens, it is difficult to care whether any of the characters survive. The final half hour of the film strays close to Tarantino’s smart, slick and quick style of filmmaking, only for the bloated script to overwhelm proceedings once more.
As director, Tarantino seems to have been influenced by the Westerns of both small and big screen in the 60s and 70s, and wants to pay homage to a genre that he loved. The trouble is that The Hateful Eight so obviously was created by a filmmaker who stubbornly insists on paying homage to the greats of the past that his film feels egotistical and backward looking, while trying to be contemporary and fun. A combination that does not work, and that’s before we add in the racism and repeated and unnecessary use of over the top violence for the sake of gore, and the oft-repeated use of one of the most offensive terms for African American people.
In all, ‘The Hateful Eight’ is bloated, overly long and self-indulgent. Tarantino seems determined to bring back a style of filmmaking that has long since died out, without wondering why this change happened in the first place. Showing film company logos from the 70s is one thing, but there is little understanding here of what made these over the top Westerns great in the first place, and there seems to be no-one able to reign Tarantino in, edit the film tightly and cut the self-indulgent homage that feels more like pastiche. ‘The Hateful Eight’ feels like a vanity project from a 15-year-old boy who was told once that he writes great dialogue.
RATING: 1/5
Review by Brogen Hayes