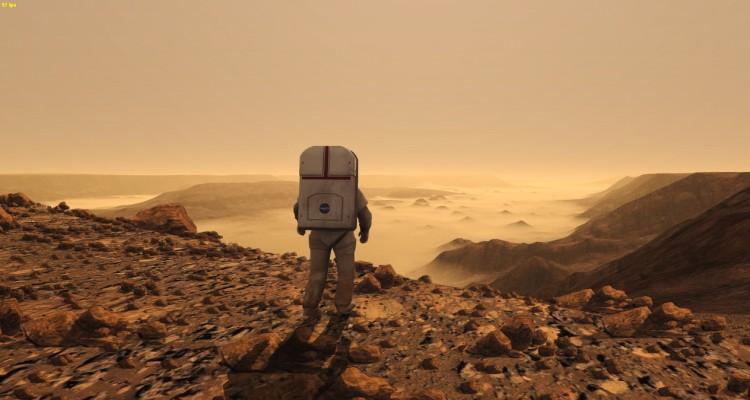 THE MARTIAN (USA/12A/141mins)
Directed by Ridley Scott. Starring Matt Damon, Jessica Chastain, Chiwetel Ejiofor, Sean Bean, Kate Mara, Jeff Daniels, Donald Glover, Askel Hennie, Sebastian Stan, Kristen Wiig
THE PLOT: When a storm hits the planet, a NASA team on a mission to Mars evacuate, leaving Mark Watney (Matt Damon) behind, believing him to have tragically died during the freak weather event. When the storm passes, and with the team on their way back to earth, Watney awakens stranded on an in hospitable planet, and must find a way to survive until he can be rescued.
THE VERDICT: There have been a slew of astronaut disaster movies on an epic scale over recent years – GRAVITY and INTERSTELLAR spring to mind – and although it could be said that The Martian is the missing chapter of INTERSTELLAR, it is an engaging and fun space flick, that is well paced, well put together and is elevated by Matt Damon’s stellar (sorry!) performance.
Damon is tenacious and warm at the centre of the film, and seems to survive being the last human on Mars by journaling, teasing the colleagues who abandoned him, and tackling his breathtaking problem one small issue at a time. Damon’s comedic timing is great, and although he is a scientist he speaks in common parlance, which makes the character warm and slightly playful. The crew that left him behind are made up of Jessica Chastain, Michael Pena, Askel Hennie, Kate Mara and Sebastian Stan. This group of the cast don’t have a lot to do, but they make their space odyssey interesting and the characters relatable. The team on earth comprises Jeff Daniels, Chiwetel Ejiofor, Sean Bean, Donald Glover, Mackenzie Davis and Kristen Wiig. Daniels also has the chance to show off his comic timing, Ejiofor is stubborn and smart, Bean rebellious, Wiig a company woman and Donald Glover channels his former scene partner Danny Pudi in his role as Abed in ‘Community’, but obviously enjoys doing so.
Drew Goddard’s screenplay, based on the book by Andy Weir, keeps all the cast relatable and warm, the tension ebbing and flowing and the audience rooting for a happy ending. It would have been all too easy for the film to get bogged down with the science and technicalities of a manned mission to Mars but, while there is certainly plenty of talk about both, this is done in a manner that feels accessible, without talking down to the audience. Damon’s character is warm, fun and relatable; perhaps an examination of how he survived the loneliness of being alone for so long would have benefitted the film in some ways, but this is addressed somewhat with the use of disco music and the communication between Watney and those trying to save him.
Ridley Scott returns to form as director; THE MARTIAN is well paced – 141 minutes zips past – and beautifully shot, and the use of disco music, teasing and the struggle to create food on an inhospitable planet bring a lightness to the film that was missing from some of those in the recent past. In fact, it is this lightness that makes The Martian so very entertaining, unpretentious and engaging.
In all, THE MARTIAN is beautifully shot, thrilling and engaging. 141 minutes glides by with plenty of glib quips, heart wrenching moments and genuine fear. The science is kept simple without being dumb, the music lightens the mood and Damon is as good as he has ever been, forming the emotional heart and soul of the film. THE MARTIAN is simply a thrilling ride that reminds us of the strength of the human spirit.
RATING: 4/5
Review by Brogen Hayes