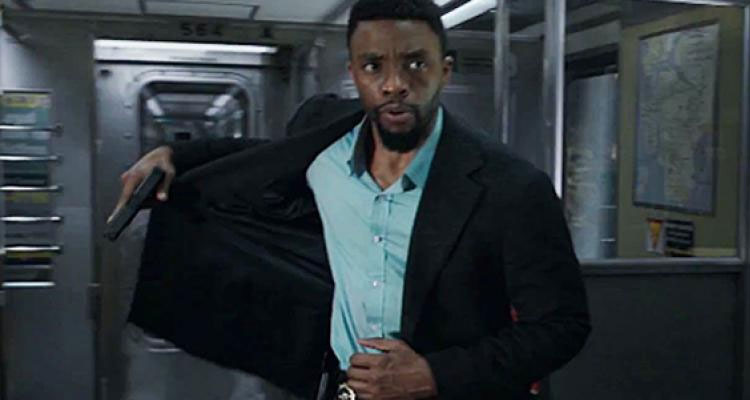 The Plot: It’s after midnight in Manhattan and thieves Ray (Taylor Kitsch) and Michael (Stephan James) are looking for trouble. They rob a restaurant and find a much bigger amount of drugs than intended. They’re interrupted by NYPD and during the firefight, seven cops are gunned down by the duo. They make their escape attempt, but it won’t be easy getting out of Manhattan. Detective Andre (Chadwick Boseman) has developed a reputation as a man who gets a job done, covering his tracks with every bullet fired. With his fellow cops enraged and looking for blood, he teams up with narc Frankie (Sienna Miller) and shuts down the 21 bridges into and out of Manhattan, in the hope of cornering his suspects…

The Verdict: Joe and Anthony Russo know a good actor when they see one. Having successfully guided a number of Marvel movies into the billion-dollar club and beyond, they’ve also developed a rapport with their actors. With 21 Bridges, they’ve produced a cop thriller as a star vehicle for Black Panther actor Chadwick Boseman. Boseman has proven himself an adapt leading man with a commanding presence in the likes of legal drama Marshall. Here he gets to flex his action muscles again with 21 Bridges and provides an ocean of calm amidst a busily-plotted film. Maybe too busy. The film packs a lot into its 99 minutes, as it gets to grips with its murky cops-and-robbers-and-cops storyline.

It starts promisingly enough, with Northern Irish director Brian Kirk getting down to business fairly quickly with an exciting if somewhat brutal shoot-out. Having worked on television shows for over a decade, it’s his first feature film since his fire-and-brimstone debut Middletown back in 2006. The time away from feature directing reveals a slight rustiness in his direction, moving the plot mechanics at a pace that doesn’t quite live up to its title. Plot A runs out after an hour, which is where Plot B kicks in. Plot A is the stronger and more credible of the two. The idea of putting Manhattan into lockdown in the middle of the night and closing the 21 bridges is a cool, John Carpenter’s Escape From New York-style concept. However, Kirk and his screenwriters Adam Mervis and Matthew Michael Carnahan only half buy into the concept.

They could have made much more of Manhattan being in lockdown and the potential for street violence interrupting the investigation and aiding the criminals. Instead, it passes off without incident in a city that apparently never sleeps. Plot B feels bolted on, as if there wasn’t enough story to sustain Plot A to feature length. Actually, there is. The frenetic chase element works well, with Kitsch and James (fresh off If Beale Street Could Talk) doing a good job of looking nervy and anxious throughout. The net is getting tighter and Andre is drawing it in ever closer. ‘The only way out is through him’ is the tagline for the film. That’s all the film needed to be, a propulsive ticking-clock thriller. Instead, it concludes with something all too familiar and predictable in cop thrillers (see also Black And Blue recently). 21 Bridges is on slightly shaky ground but is still entertaining and does its job by the book – like its determined lead character.