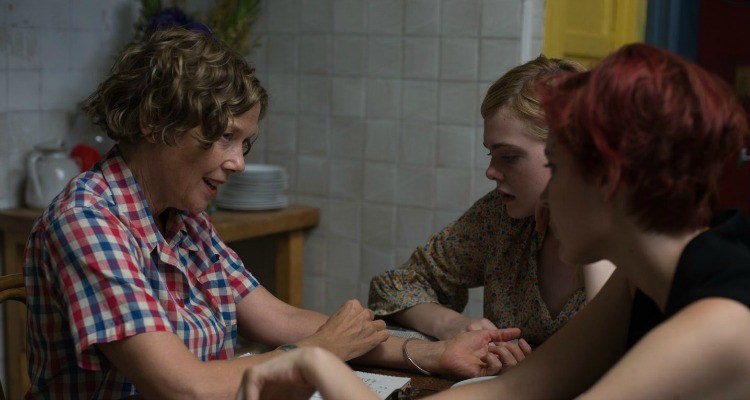 20TH CENTURY WOMEN (USA/16/119mins)
Directed by Mike Mills. Starring Annette Bening, Greta Gerwig, Elle Fanning, Billy Crudup, Lucas Jade Zumann
THE PLOT: In late 1970s California, Dorothea (Annette Bening) and her son Jamie (Lucas Jade Zumann) live together in a large house, along with lodgers Abbie (Greta Gerwig) and William (Billy Crudup). The film navigates the relationships that Jamie forms between his mother, his housemate and Julie (Elle Fanning) the girl he has a crush on and who climbs in his window to sleep beside him every night.
THE VERDICT: ’20th Century Women’ is an examination of three generations of women in the late 1970s, and the choices they make in their lives. While the characters are well rounded, verbose and interesting, they are also let down by a script that has some lovely scenarios, but very little story.
Annette Bening leads the cast as the vibrant and engaging Dorothea, and makes a woman who grew up in the 1920s essential and bright, but also relatable and fun. Bening easily carries the film on her shoulders, and is the lynchpin that holds the film together. Greta Gerwig makes Abbie a lost but determined young woman who has moved away from her family, but thinks she knows what she wants in her life. Gerwig makes Abbie the least familiar character we have seen her play on screen to date, but she is also a character we have seen in film before. Still, Gerwig is vibrant and engaging on screen. Elle Fanning rounds out the central trio of women as a troubled young woman who is fascinating, but pushes people away from her. Billy Crudup makes William a fun character, and Lucas Jade Zumann makes Jamie a relatable teenager throughout the film.
Mike Mills’ screenplay gives a lot of focus to the characters in the film, making them rounded, engaging, verbose and relatable, but they seriously struggle to make the film feel like a contained story, as there is very little story to keep the scenes joined together. Several moments throughout the film are charming and filled with heart, but they never truly come together to make this well written, slightly pretentious film a narrative as a whole.
As director Mike Mills makes sure that the actors make their characters feel like truly real people on screen, and they are often vibrant and utterly engaging, but they struggle to keep the momentum of the film moving, since there is very little in the way of story to be told. That said, it is a delight to spend time with Dorothea and her house of assorted characters as they try to find where they belong in a newly feminist world.
In all, ’20th Century Women’ has a great cast, strong characters and lovely dialogue, but there is a sincere lack of story to hold this drifting and loose story together.
RATING: 3/5
Review by Brogen Hayes