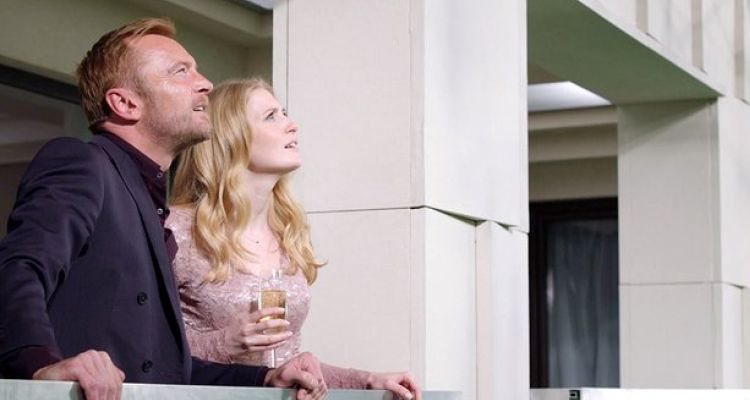 11 MINUTES (Poland|Ireland/15A/81mins)
Directed by Jerzy Skolimowski. Starring Richard Dormer, Paulina Chapko, Wojciech Mecwaldowsk, Andrzej Chyra, Dawid Ogrodnik
THE PLOT: In an unnamed Polish city, several people encounter each other over the space of 11 minutes, changing each of their lives forever.
THE VERDICT: Director Jerzy Skolimowski takes a leaf out of the best episodic ensemble films – including ‘Pulp Fiction’ and ‘Magnoli’a – to try and tell the story of how some events are inevitable, and the moments leading up to tragedy. The trouble is that there are very few reasons to care for this cast of characters, since we never truly get to know any of them.
The cast is led by our own Richard Dormer as a sleazy Hollywood filmmaker, and he is joined on screen by Paulina Chapko, Wojciech Mecwaldowski, Andrzej Chyra, Dawid Ogrodnik, Agata Buzek, Piotr Glowacki and Jan Nowicki. It is nigh on impossible to tell whether the cast are giving good performances, bad ones or something in between as the script they are given to work with seems to be a jumbled mess.
Written for the screen and directed by Jerzy Skolimowski, ’11 Minute’s is disjointed, fragmented and a genuine mess. The audience is never given a chance to get to know the characters that flit on and off screen, other than the things that they would tell people they are meeting for the first time; one is a film director, one got married yesterday, one is an artist… And so on. The screenplay is completely underdeveloped, so when disaster strikes it does not, and cannot, elicit any sort of emotional response from the audience since they are never given a reason to care. There is the germ of a good idea in 11 Minutes, but it is lost in incidentals.
In all, ’11 Minutes’ is quite simply, a mess. The audience is never given a chance to root for the characters or get to know them, so this ambitious project about the moments before disaster is emotionless and unengaging.
RATING: 1/5
Review by Brogen Hayes